A tricky forecast for tonight as we are dealing with many things that will contribute to what may fall in central Indiana.

We’ve been tracking the system that will impact Indiana tonight since it was over the northern Pacific Ocean.  Moisture has started falling in Illinois and Missouri this afternoon. The area is under a Winter Weather Advisory until 1 p.m. Monday. 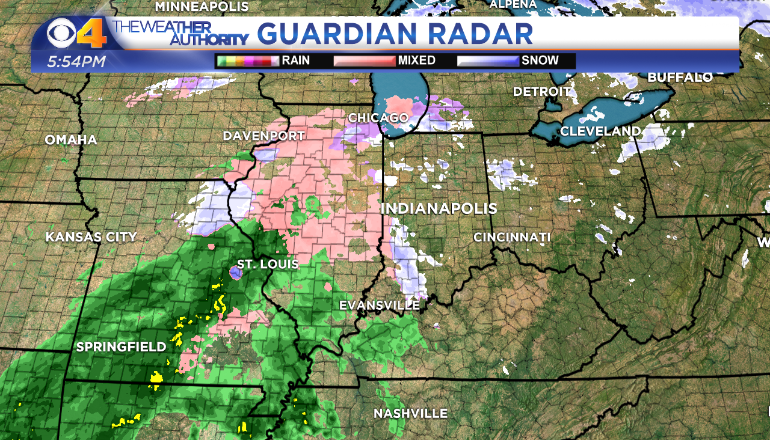 While the radar is indicating moisture falling over Indiana, nothing has yet reached the ground.  The air remains very dry after our long run of cold air.  As the precipitation falls through the air, it evaporates as it gets closer to the ground.  Until the atmospheric column if saturated, we will remain dry.

Evaporating precipitation adds some more complexity to the forecast.  Go up in the sky about 1,500 feet to 5,000 feet and you will find air that is above freezing by a degree or two.  Dry air extends from the surface to about 4,000 feet.  As the precipitation falls in to the dry air, it evaporates.  A process called evaporation cooling takes place and drops the temperature of the nearby air particles.  This will allow air in the 1,500 feet to 5,000 feet layer to cool.  So initially, once the atmospheric column saturates, precipitation should fall as snow.

Temperatures climbed above freezing today which helps somewhat.  Specifically, the air temperature climbed to 34° in Indianapolis this afternoon.   However, surface temperatures on most outdoor items remain below freezing.

I took a laser thermometer outside and took some measurements:

It does appear we could have two to three hours of rain falling in the Indianapolis area.  This will allow for some ice accumulation for Monday morning.

Keep in mind, even 0.01″ of ice accumulation can cause major problems, especially when trying to walk outside or drive.  Expect the Monday morning commute to be slick.

One thing I don’t know, is how much all the of salt on major roads will impact ice accumulation.  Salt, along with other chemicals, have been on area roads for several days.  So this may limit the amount of ice in some areas.

For northern areas of central Indiana, snow will be the prodiment precipiation type.  Eventually, we will see rain changing over to snow in Indianapolis and areas further south early Monday before tapering off after sunrise.  At this point, it looks like we could see areas of 1″ to 2″ of snow accumulation for areas north of I-70.  South of I-70, should have less than 1″. 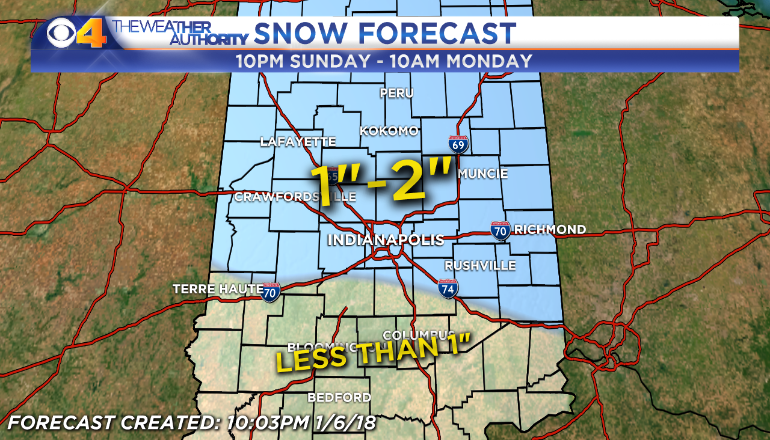 So we are likely going to have a thin layer of ice under 1″ to 2″ of snow by Monday morning.

Precipitation should start to fall in central Indiana after 8pm and should begin falling in Indianapolis after 9pm. 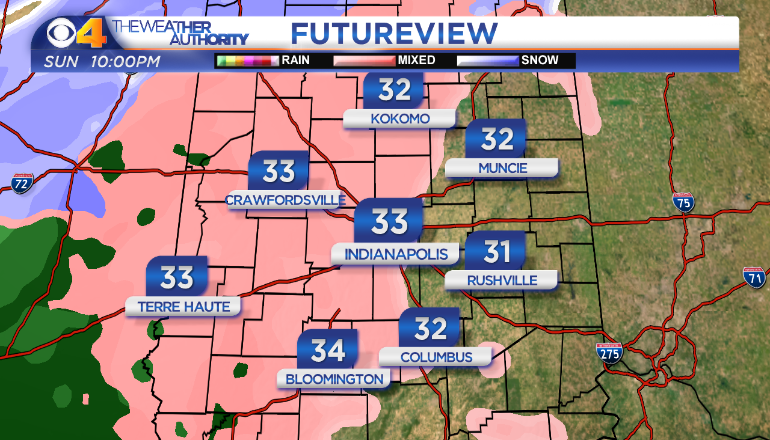 As mentioned above, it will likely start as a quick burst of snow before changing over to freezing rain.

As we go through the night, freezing rain will change over to a little sleet and then snow. 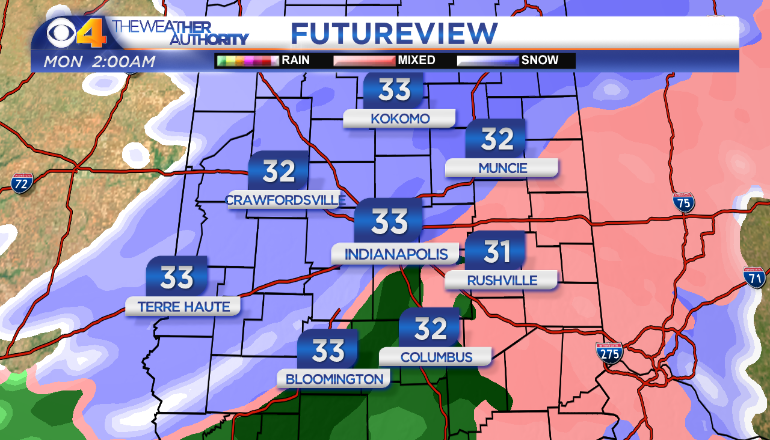 As the moisture departs, it will end as snow.  Accumulating precipitation should be out of the area by 9am Monday.

Our weather conditions across central Indiana have been very slowly improving since we received 2" of snow Tuesday night and record cold temperatures Wednesday morning. Temperatures Friday morning are still cold enough to need to winter coat out the door. However, a wind shift out of the southwest will help warm our temperatures to 60° this afternoon. That's still below average--we should be in the mid 60s--but better than where we were Thursday afternoon.

Clouds are filling into the state this Friday morning, but we will see some breaks of sunshine during the afternoon. The evening remains dry, aside from a very slight chance for a couple isolated showers.

Rain is coming to central Indiana this weekend; a warm up is coming next week

11pm Update: A Frost Advisory is in effect for east central Indiana from 1am to 9am Friday. Clouds will move in overnight and a few scattered showers are possible Friday.

After two chilly days with rain and snow showers, sunny skies returned to central Indiana Thursday with temperatures nudging above 50 degrees. We'll have one more dry day Friday with winds up to 25 mph along with highs near 60 degrees.

It's going to be a better day! Parts of central Indiana woke up to a few isolated rain/snow showers. However, with all the snow on the ground melted away, the morning commute is going a lot smoother. Temperatures Thursday morning aren't quite as cold as they were Wednesday morning. Extra cloud cover this morning has kept temperatures in the low to mid 30s. You'll still need the winter layers out the door.

Temperatures this afternoon will rise into the mid 50s. That's still ~10° below average for this time of year, but an improvement over the 40s we had yesterday. Take the sunglasses with you today, you're going to need them!

10 ways to avoid tax return slipups, according to the IRS

STUDY: No link between epidural use during childbirth and autism

While You Were Sleeping: Coronavirus updates for April 23

Reasons why your tax refund may be delayed, what the IRS is saying

10 ways to avoid tax return slipups, according to the IRS