Saturday night we identified a couple pieces of upper-level energy could could come together to produce a wintry mess later this week.  There is a northern piece and a southern piece.

The southern piece of energy is located over the Pacific Ocean off the coast of California.  This piece of energy will slowly move east over the next couple of days bringing rain to the south-central Plains by midweek. 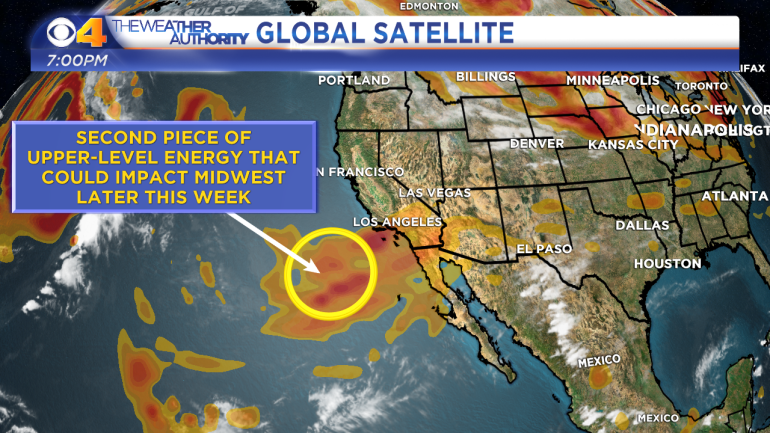 One of our forecast models shows how the rain develops over Kansas, Texas, and Missouri Wednesday evening.

The moisture is forecast to continue moving east Thursday and Friday.  There remains some question among computer models as to how far north the precipitation shield will reach.

How far north the precipitation reaches may have something to do with the northern piece of energy.  It is located approximately 4,000 miles away from Indianapolis in northern Russia as of Sunday evening. 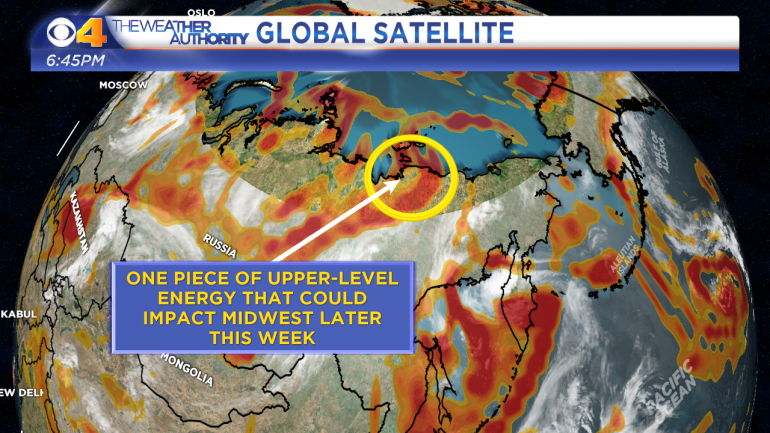 Long range computer models suggest the piece of energy will track over the Arctic Ocean, over northern Canada and eventually reaching the northern United States midweek.

If both pieces of energy can phase together midweek it could help pull moisture further north.  It could also allow colder air to interact with the moisture producing a wintry mix.

The European computer model (ECMWF) has been fairly consistent keeping a chance for a wintry mix in Indiana.  The Global Forecast System computer model (GFS) has been keeping the two pieces of energy out of phase.  It has also been keeping the southern piece further south, and moving it quicker to the east, not allowing it to phase with the northern piece.  This would keep most of the precipitation to our south along with keeping it mainly rain.

It is interesting to look at a little closer at the ensemble models of each computer model.  (Follow the link for an explanation of ensemble weather forecasting.)  The ECMWF ensemble has 51 members.  The GFS ensemble has 21 members.  We have the ability to look at each member and whether or not is produces an accumulating snow.

When it comes to the ECMWF ensemble, the latest run has 35 members, or 68%, producing measurable snow for Indianapolis.  That is up 30% from the overnight run when 27 members suggested snow.

The morning run of the GFS ensemble has 12 members (57%) producing measurable snow for Indianapolis.  That is up 20% from the overnight run when 10 members projected snow.

Does that mean it is going to snow?  No.  However, it is something we are going to continue monitoring.  Not mentioned above, the Canadian forecast model has also been consistent with bringing winter precipitation to the Hoosier state Thursday.

The other thing we will need to watch is the potential for it not being just rain and snow.  There are some signs this could start out as rain, then transition over to freezing rain, to sleet, to snow.  Fun, isn’t it?!

This is still many days away and much can, and likely will, change.  As you can see from everything mentioned above, this is a lot like threading a needle (getting everything coming together at the right place and right time) on a much larger scale. It would be nice to get the computer models in better agreement for Thursday and Friday.  That will hopefully happen as we get closer to midweek.  As I like to say… Stay tuned!

The sun came out for awhile but after the morning rain, golf courses were a bit too muddy for play. 61 at the Indy airport was the warmest temperature since December 11. That is 16 degrees above average and a typical temperature for early April. A cold front Saturday night is pushing the rain east and letting some cooler drier air filter into Indiana. Clouds Monday morning will give way…

Man dies after shooting in alley on Muncie’s southwest side