Nate reached tropical storm strength this morning. The center of Tropical Storm Nate is located inland over northeastern Nicaragua. The center is expected to approach the coast of the Yucatan Peninsula late Friday.

Authorities in Costa Rica have raised that country’s death toll blamed on flooding fed by Tropical Storm Nate to seven and say 15 others are missing. Costa Rica’s Judicial Investigation Organism updated the toll from an earlier two on Thursday. President Luis Guillermo Solis said earlier that more than 5,000 residents were being housed in shelters due to flooding. 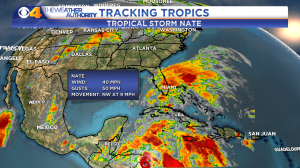 Nate is moving toward the northwest near 9 mph. A turn toward the north-northwest at a faster forward speed is expected this afternoon or tonight, with that motion continuing through Friday night. Maximum sustained winds are near 40 mph with higher gusts. Tropical-storm-force winds extend outward up to 50 miles mainly over water to the east of the center. Little change in strength is expected today while the center is over land. Strengthening is likely once the center moves over the northwestern Caribbean Sea tonight and Friday. 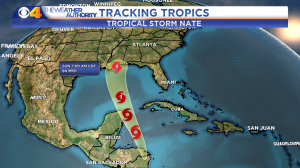 On this forecast track, the center of Nate should move across northeastern Nicaragua and eastern Honduras this afternoon and then over the northwestern Caribbean Sea tonight and Friday. The system will be carefully monitored for possible US landfall along the central Gulf Coast this weekend. 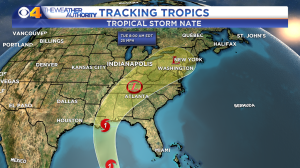 The remnants of Nate could bring heavy rain to the southeastern US next week.

We picked up a couple hundredths of an inch of rain early Tuesday morning but that rain is already leaving the area. The rest of the day will be mostly cloudy and seasonably cool with highs just in the upper 40s.

More rain moves in after midnight and into Wednesday morning. We'll have an overall rainy day with a few thunderstorms distributing heavy downpours. Many of us will accumulate a solid inch of rainfall with some of our southern towns getting more than an inch and a half.

Although it only reached the mid-40s in most areas Monday, it felt warmer because of sunshine and light winds.

Temperatures will get cold again Monday night. There will be some precipitation moving in as well.

Chilly this morning! Many of us are nearly ten degrees colder than we were on Sunday morning. We will filter through clouds this morning with more sun expected this afternoon. Temperatures will only manage to make it into the 40s over the course of the day so jackets are needed.

We can't rule out a wintry mix in our northern counties Tuesday morning but most of us will just be dealing with rain. The wet weather should be isolated to the morning with plenty of dry time during the remainder of the day.

Texts: US census manager told counters to use fake answers

Pedestrian fatally struck on US 31 in Bartholomew County

Pedestrian fatally struck on US 31 in Bartholomew County

Mask complaints, enforcement ramping up in some Indiana counties

Texts: US census manager told counters to use fake answers