In the Northern Hemisphere hurricane season runs from June 1st through November 30th.  Historically, September has been the busiest month for hurricanes in the Atlantic Basin and so far this has been a busy season. Our tenth, named storm of the season has formed and will soon reach hurricane status. Tropical Storm Jerry will move toward Puerto Rico and the Bahamas this weekend. Maximum sustained winds have increased to near 65 mph with gusts to 75 mph. Tropical-storm-force winds extend outward up to 45 miles from the center. 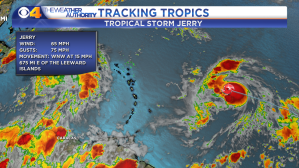 At 11: 00pm the center of Tropical Storm Jerry was located 675 miles east of the Leeward Islands. Jerry is moving toward the west-northwest near 15 mph . A west- northwest motion at a slightly faster forward speed is expected over the next few days.  Jerry is forecast to become a hurricane on Thursday, with little change in strength anticipated on Friday or Saturday. 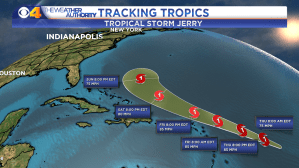 Clear visibility for Indianapolis this morning but we have had reports of dense fog in both Muncie and Terre Haute this morning. We've seen visibility close to zero in both of those areas so you'll want to give yourself some extra time this morning so you can stay safe on the roads.

An otherwise nice morning is expected. Temperatures have dipped to the 60s just ahead of sunrise but will be climbing through the 70s most of the morning. Highs will be in the 80s later this afternoon and we'll have a partly to mostly sunny sky. Should be a great pool day!

Central Indiana to see higher humidity, chance for rain for remainder of week

A cold front moved across the state earlier this week and brought a short reprieve from the higher humidity we had been dealing with. The frontal boundary will eventually move back north as a warm front. This will result in the higher humidity returning along with a better chance for scattered storms. We'll have a slight chance for a shower Thursday afternoon, mainly south of I-70.

This system will bring more unsettled weather this week with a daily chance for thunderstorms statewide Friday through the weekend. Indy 500 qualifications should be able to continue this weekend, though there may be delays in the action.

Great pool day; tracking some rain chances over the weekend

Absolutely beautiful for our Wednesday and Thursday. Great pool days! You can also certainly plan to have outdoor dinners both of these days. Temperatures are mainly in the 60s this morning and 70s for lunchtime.

Normal highs this time of the year are in the mid-80s and that is exactly where we will be both Wednesday and Thursday afternoons. We'll have some clouds tossed our way from rain south of us this morning but as that passes more sun will be revealed for the beautiful afternoon.

‘Like the Titanic’ – NCAA experts warn of coronavirus spread

Central Indiana will see a better chance for rain this weekend

‘We all have to do our part’: Gov. Holcomb, officials express concern over coronavirus trends