Fifty-five million Americans are expected to travel 50 miles or more for Thanksgiving this year according to AAA.  This is the second highest travel volume since AAA started tracking the amount of travelers in 2000.  Those traveling on Wednesday (the second busiest travel day of the year) or Thursday may encounter weather that could cause a few headaches.

An area of low pressure is expected to develop over the central Rocky Mountains Monday evening, exiting the Rockies in southern Colorado Tuesday morning.  The low is projected to deepen/strengthen as it crosses Kansas and lifts north in to Iowa by late Tuesday night/early Wednesday morning.

The low will keep traveling east-northeast over the following 24 hours, eventually reaching the Atlantic Ocean by early Thursday morning.

Along the path of the low, and north and south of it, precipitation will develop in all forms.  Rain, snow, wintry mix are all anticipated. 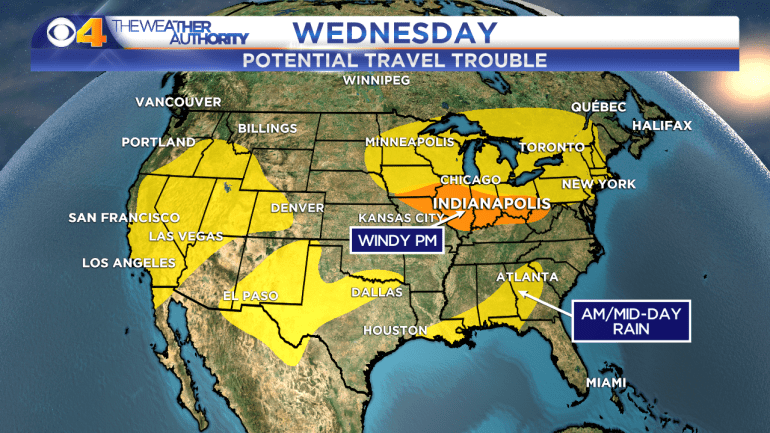 The map above indicates areas of the lower 48 states that could see travel issues Wednesday due to the weather.

The system mentioned above will be impacting the upper Midwest from Minnesota/Iowa to Vermont/Massachusetts with rain, snow and wind.   The area highlighted in orange is where strong, gusty winds could develop Wednesday afternoon and evening.  If you are traveling east on I-70 out of central Indiana, you are going to get great gas mileage.  If you are traveling west on I-70 or northwest on I-74, plan on a strong headwind.

A cold front will extend south of the area of low pressure, through Georgia to the gulf coast.  This could bring showers and thunderstorms to the Atlanta area late morning through early afternoon.  Depending on the exact timing, some flight delays could be possible out of the Atlanta Hartsfield airport.

Rain and snow showers are projected to develop over New Mexico and western Texas.  Some of the rain could extend as far east as Dallas by late afternoon/early evening.  While I’m not expecting much in the way of thunderstorms, rain could create a few delays in/out of Dallas-Fort Worth airport.

In the western United States rain and snow showers (high elevation) will be possible Wednesday afternoon in to Wednesday night.

You can monitor flight delays and radar on a tool available here on CBS4Indy.com.  You can also find links to airlines that fly in/out of the Indianapolis International Airport.

Completely dry weekends have been rare this year as we've had twice as many weekends with rain or snow. Our next chance for rain will arrive late Saturday and continue through Sunday morning. As of now, it does not look like this will be a heavy rainfall event, and severe storms are not expected. Highs will be near 70 degrees Saturday and about ten degrees cooler on Sunday.

We'll see another chance for rain late Monday through early Tuesday and high temperatures will rise into the 70s early next week. Wet weather will continue through Wednesday and Thursday. Up to an inch of rain is likely this week.

It is a much milder start to the day with temperatures being more than 10 degrees higher in Indianapolis and parts of central Indiana! We are starting off in the 40s this morning, which means you will want to have a light jacket on hand early in the day.

Live Guardian Radar is showing light shower activity this morning, but the moisture is entering a very dry atmosphere with dew points in the 40s. That means much of the rain is likely evaporating before hitting the ground. At best, there could be a few light sprinkles for the next couple hours. The White County Airport near Monticello reported light rain around 7 a.m. at the weather station on site.

INDIANAPOLIS, Ind. -- The 30-day outlook for Indiana predicts above average temperatures and above average precipitation, and right on cue, a warm up and rain is on the way.