A cold front will pass through central Indiana Sunday evening.  It will remain warm and humid before the front passes.  There will also be a chance for a couple rounds of rain and thunderstorms.

Sunday morning will bring a chance for rain, with an embedded thunderstorm, to central Indiana.  This round of rain looks to move in from the southwest starting as early as day break.

The morning round of rain will play a major impact on the chance for afternoon thunderstorms.  If the rain arrives later in the morning, keeping the atmosphere a little cooler/stable, and holding clouds around the area, that will keep temperatures down for the afternoon and limit the threat for severe thunderstorms.  However, I think we could see breaks in the clouds, allowing temperatures to climb to near 80°.  Combine that with dew point temperatures in the low 60°s the atmosphere will begin to destabilize.

If you don't like strong/severe thunderstorms, root for clouds to stick around Sunday!

Computer models suggest a narrow corridor of instability will develop in the western/southern half of the state by mid-afternoon.  This would allow thunderstorms to quickly strengthen once they develop.

The main threat from thunderstorms will be strong winds.  A secondary threat with a few thunderstorms will be damaging hail.  As the storms move in to eastern Indiana, nearing the Indiana/Ohio state line, the tornado threat may begin to tick up as there is better support for tornado development in the upper-levels of the atmosphere (more divergence allowing air parcels to evacuate lower levels).

TROUBLE FOR THE TRACK

The threat of rain Sunday could make it difficult for the "Fast Nine" and the "Last Row Shootout" at the Indianapolis Motor Speedway. 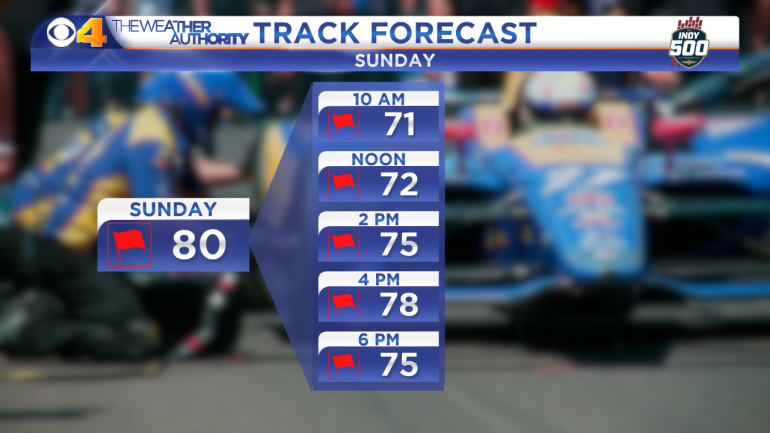 While we are not expecting all day rain, rain in the morning could delay the start of qualifying the last row of the field of cars.  The further qualifications get pushed back, the higher the chance for thunderstorms to impact the track during the afternoon.

I'm throwing a red flag for much of the day at IMS.  That doesn't mean there couldn't be time to complete qualifications, but I think it will be difficult.

By mid-week an upper-level hot dome is projected to build in from the south, allowing temperatures to soar to the warmest levels of 2019.  High temperatures are forecast to top out in the upper 80°s.  I think there could be some locations reaching the low 90°s on Friday.

Along with the heat, the humidity will begin to increase.  Dew point temperatures are projected to rise to the upper 60°s and lower 70°s.  That means one thing.  A return of the "mugglies".  Right now the heat index is projected to climb in to the lower 90°s Thursday and Friday.  If you plan to attend Carb Day Friday, do yourself a favor and start hydrating your body (with water) starting Wednesday. 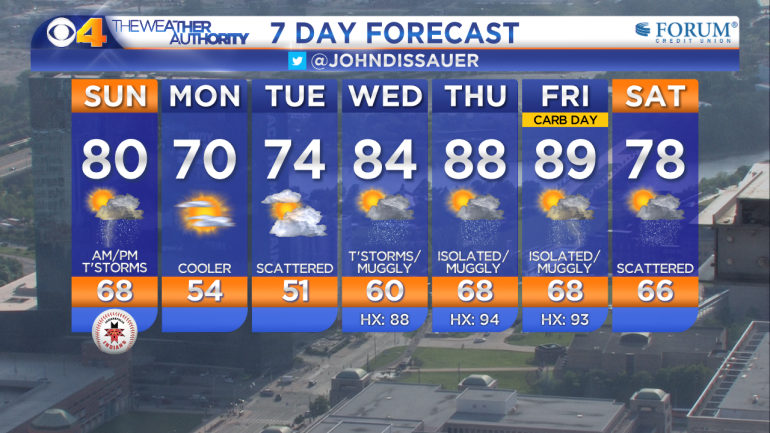 The heat is holding on! We're stringing together a long stretch of 90-degree days in central Indiana. We were in the low 90s Friday afternoon with Indianapolis tallying its 5th 90-degree day of the year.

High pressure is expanding across the region, sending the jet stream north, heating us up and keeping as rather dry for the next week.

Gorgeous summer morning across central Indiana! We're in the upper 60s and low 70s this morning and heating up quickly. That sunshine is going to bump our temperatures up to 80 between 9 and 10 o'clock. If you want to take lunch outdoors, you'll need shade!

We'll hit a high of 90 this afternoon. Plenty of sunshine start to finish. Expect it to stay rather warm even after sunset; temperatures will stay in the 80s until midnight! We'll stay dry all of Friday so enjoy it!

Hot and humid for the entirety of the next week. We are looking at potentially the longest string of 90s that we've had since a similar stretch in 2012. Take it easy! This is a lot of heat for our bodies to be up against. It'll be important to stay hydrated and to have access to air conditioning during this extended heat wave. In fact, you only need three consecutive 90 degree days to actually be a heat wave and we'll easily double those credentials. We'll have the 70s until about 10am when we climb right back up to the 80s. We'll briefly hit 90 this afternoon and with the humidity and sunshine it'll feel like every one of those degrees.

The UV index is considered 'very high' again today so not only do you need to use sunscreen but also reapply every couple of hours. Take lots of breaks in the shade if you must be outside.

US issues guidelines but no new rules for safe air travel

Average age of Indianapolis homicide victims this year is 28

The psychological reason some choose not to wear masks

The psychological reason some choose not to wear masks

US issues guidelines but no new rules for safe air travel