I’m watching two waves of energy that should impact central Indiana before the weekend begins. 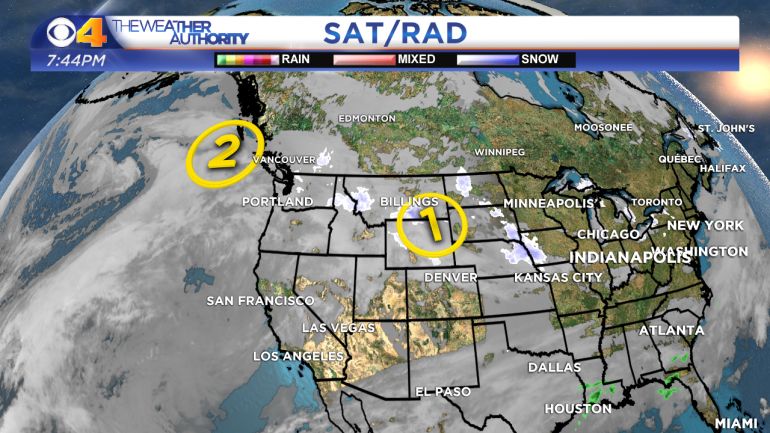 The first is a weather system coming out of the Rocky Mountains. This will bring a weak wave through Indiana Thursday evening. As the energy moves in to Illinois, light snow showers may develop late Thursday afternoon, spreading east through north-central Indiana.

At this time, this doesn’t look to have very much moisture available to produce snow. A 24-computer model average only spits out 0.01″ of liquid. At a 14-16:1 ratio, we are looking at less than a quarter inch of snow. I think a dusting to 1/4″ will be possible, especially in western and northern Indiana. Areas near Peru may be able to squeeze out a half inch.

The second is a system that is arriving on the southwest coast of Canada. It will quickly slide over the Rocky Mountains and pass through the central United States. This one may have a little more moisture and energy to bring an accumulating snow to central Indiana late Friday afternoon through Saturday morning.

With these types of systems we really need to see what is left of the energy once it gets out of the Rockies, and there won’t be a lot time for computer models to sample the energy before it arrives in Indiana.

Latest forecast data suggests central Indiana could see 1″ to 2″ of snow. However, there have been many of these waves produce higher amounts (3″ to 4″). I’m not going to go quite that high just yet, but the potential for a 1″ to 3″ band does look possible. 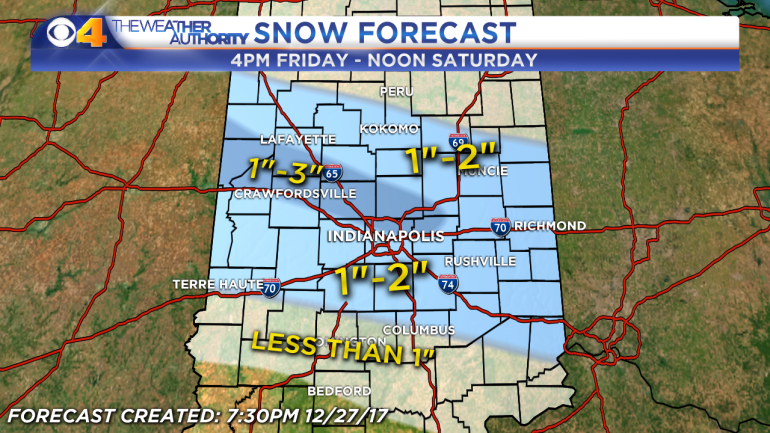 We will continue to monitor this weather system. There is a chance it fizzles out and doesn’t make it here and there’s also potential for it to drop a couple inches. This forecast is subject to change over the next 24-36 hours, so be sure to stay tuned!

It was a cold morning throughout central Indiana. With wind, wind chill values dropped as low as -28°!

Officially, Indianapolis dropped to -3°, the coldest temperature the city has experienced since February 25, 2015.

Indianapolis is on its 76th consecutive hour below freezing (32°F). The airport dropped below 32° at 3pm Sunday, December 24.

Long range data suggests we may extend the number of hours below freezing to over 320 hours. Forecast models don’t have the high temperatures getting to 32° until January 7. 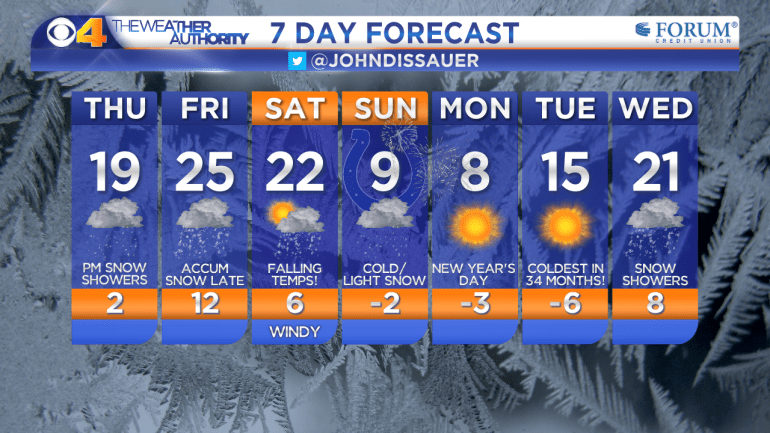 A mild week ahead for central Indiana

Now that March first has arrived, it's time for a recap of meteorological winter, the period from December first through February 28th. In terms of temperatures the season was too bad. We had 44 days with above average temperatures 40 days will below average temperatures, and an almost even split. The warmest day was 65 degrees on December 11th and the coldest was a low of zero on February 7th.

I predicted six, one-inch snows for the winter season. We had six for a total of 22.2" of snow, 3.7" below average. I'll have my outlook for the upcoming Spring, Tuesday night at eleven on CBS 4 News.

Cool and quiet start to March!

We started off Monday mostly cloudy, but skies are already becoming clearer across central Indiana. High pressure situated west of the state will slide over the Midwest and provide the region with full sunshine this afternoon.

It will be much cooler compared to the unseasonably warm highs we saw over the weekend. Highs will climb into the mid-40s this afternoon, which is right around where we should be in early March.

March comes in like a lamb; may need wool sweater to fight off the chill

The sun came out for a while but after the morning rain, golf courses were a bit too muddy for play.

61 degrees at the Indy airport was the warmest temperature since December 11. That is 16 degrees above average and a typical temperature for early April.