We’re watching a couple of quick moving weather systems that could impact portions of central Indiana through the middle of the work week.

The first system is crossing Illinois.  It is a cold front, associated with an upper-level disturbance, that is moving to the east.  A few light showers have developed ahead of the front in northern Indiana.  A narrow line of precipitation – in the form of rain – is stretched north to south across Illinois. 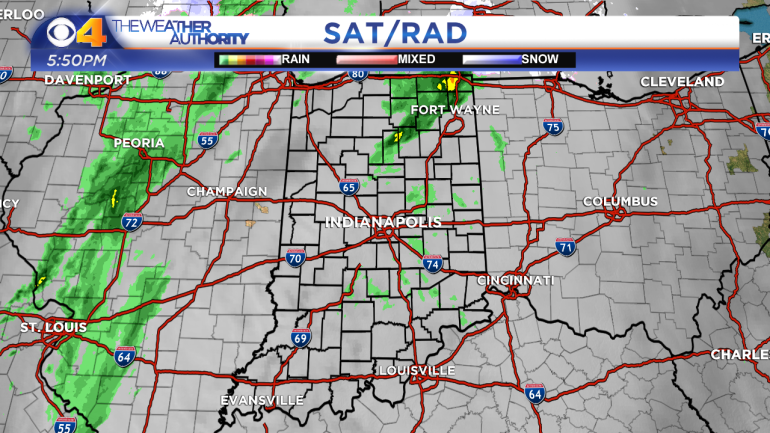 As the disturbance passes over, it may be able to squeeze out just enough moisture to produce a few rain drops, mixing with a few snowflakes through sunrise.

Timing will be everything as temperatures are expected to fall to +/- 1° of the freezing mark at the surface by 7 a.m. Monday.  If the disturbance brings the moisture earlier in the night, temperatures will be a couple degrees warmer allowing the precipitation to fall as all rain.  If it arrives at sunrise, when the air temperature is coldest, there could be more snowflakes falling.  At this time I am not expecting this to cause any issues for the morning commute, however if their is a little more moisture available in the atmosphere, there could be a brief period of freezing rain/drizzle and snow.

A second system is taking aim on Indiana Tuesday morning.  The upper-level energy for the system arrived over western Canada Sunday evening. 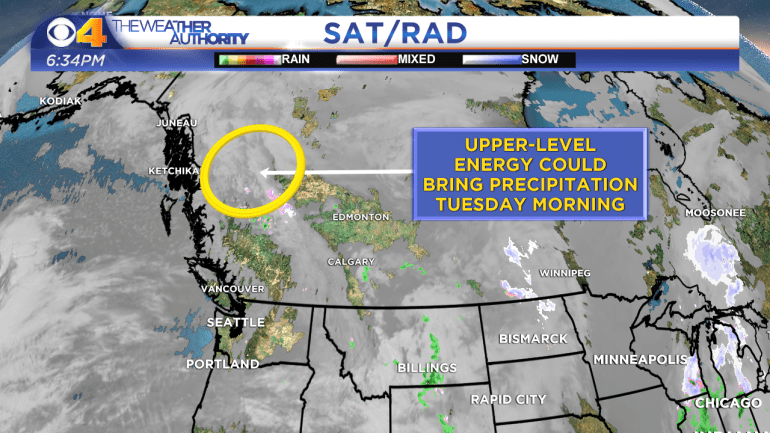 Now that the upper-level energy is onshore, we should be able to better sample the energy and put that data in to the computer models.  Sunday night’s computer model runs and Monday morning runs should do a better job resolving what could happen with Tuesday morning.

All of that being said, this does not look like a significant impact for central Indiana.  Some areas could receive a couple tenths of an inch of wet snow, while most areas receive rain.  Stay tuned!

We were set back 7 or 8 degrees today because fog and overcast clouds until this afternoon blocked the solar energy. Therefore temperatures stayed in the 70s. Not as cool Sunday morning as the past few mornings when it was in the 50s. The combination of a brisk southwest wind an a some sunshine early will make it a little warmer Sunday afternoon. You will probably notice the increase in…

Back to summer for the weekend; colder next week

Refreshing and comfortable this morning as we wake up in the 50s. We have had dense fog bringing visibility down under a half mile near Bloomington and Terre Haute but that has been fluctuating.

No expectation of dense fog in the city this morning. A beautiful sunny sky will be expected all day Friday. Temperatures will return to the 70s by lunchtime and could briefly hit 80 this afternoon. Normal highs this time of the year are just in the mid 70s, so this is a treat for late September.

The longest dry spell of the year will continue

Most of central Indiana is abnormally dry, and our long dry spell is now setting some milestones. With only .04" of rain in the rain gauge, this is currently the driest September on record. We have had 37 consecutive days without at least a tenth of an inch of rain, the longest stretch since we had a 47-day dry spell in 2012. Looking back to August 1, over that seven-week span, we have amassed a 3.48" rainfall deficit.

The calendar says fall but the weather seems confused. The last weekend of Summer felt like fall and the first weekend of Fall will feel like Summer. Our dry weather will continue this weekend. No rain is expected until early next week.

How it happened: From law professor to high court in 4 years

In her words: Amy Coney Barrett on faith, precedent, abortion

Shooting on Indy’s near west side leaves 1 critically injured

T.Y. Hilton hopes call from grandma will pull him out of early funk

Colts: ’18 trade with Jets proving to be ‘great move’

Tailgating and fan experience will change for the Colts’ home opener