From the National Hurricane Center: 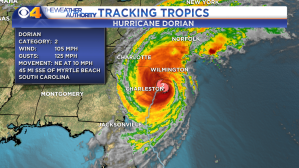 Dorian is moving toward the northeast at 10  mph. Reports from an Air Force Reserve Hurricane Hunter aircraft indicate that maximum sustained winds are near 105 mph with gusts to 125 mph. 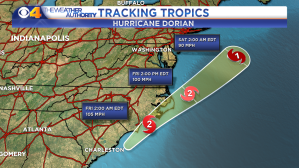 A turn toward the northeast will continue tonight, and a northeastward motion at a faster forward speed is forecast on Friday. On the forecast track, the center of Dorian will continue to move close to the coast of South Carolina this afternoon, and then move near or over the coast of North Carolina tonight and Friday. The center should move to the southeast of extreme southeastern New England Friday night and Saturday morning, and approach Nova Scotia later on Saturday. Slow weakening is expected during the next few days. 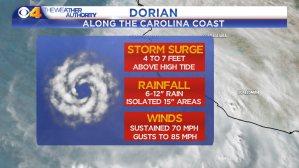 The combination of a dangerous storm surge and the tide will cause normally dry areas near the coast to be flooded by rising waters moving inland from the shoreline. The water could reach 4 to 7 feet above ground somewhere in the indicated areas if the peak surge occurs at the time of high tide. The surge will be accompanied by large and destructive waves. Surge-related flooding depends on the how close the center of Dorian comes to the coast, and can vary greatly over short distances.

Dorian is expected to produce the following rainfall totals through Friday:

This rainfall may cause life-threatening flash floods.

The sunny stretch continues today for central Indiana, but you will notice that it will feel much cooler compared to Wednesday. A wind shift occurred last night and the northerly breeze today will channel in the cooler temperatures for the afternoon.

Despite the slight cool down, it’ll still be a great day to head outside and take kids to a local playground or park. Indianapolis will climb to 49° this afternoon, which is a few degrees above average for early March.

The sunny streak will continue for central Indiana

March is our 5th cloudiest month of the year with an average of 50% of possible sunshine. The first three days of the month have been sunny with 95% of possible sunshine. We will continue our streak of clear days through the weekend with a warming trend. Highs will be in the 40s Thursday and Friday and in the 50s this weekend.

It’s the best day of the week!

It's the best day of the week! If you don't have plans to be outside, we encourage you to make them! Temperatures Wednesday morning have been running ~5° to 15° warmer than they were Tuesday morning. However, there is still a chill in the air temperatures in the low to mid 30s means that you'll need that coat out the door this morning.

You can shed that heavy coat this afternoon as temperatures quickly rise into the upper 50s. A few locations, especially our southern counties, could even crack that 60° mark. These temperatures will be well-above average and closer to early April levels.

Americans with debt could be in for some unwelcome tax surprises

US jobless claims tick up to 745,000 as layoffs remain high

Timeline on COVID-19 vaccines for kids

Group of city leaders, including Mayor Hogsett, to get COVID-19 vaccines

Second arrest made in deadly January shooting on near southeast side