Snow is wrapping up this morning but may continue to bring slick spots to area roadways. Temperatures will hold in the 20s for most of the day, although some sunshine may peek through cloudy skies.

A Winter Weather Advisory remains in place for the southern parts of central Indiana through mid-morning.

The forecast looks dry for about 24 hours before the next system arrives. And it could be a doozy. The big question is where.

The next system looks to slide into northern Indiana and bring sustained moderate snow. The cutoff for heavy snow accumulation could be steep. Six to 12 inches of snow could be possible for those in the band of snow. 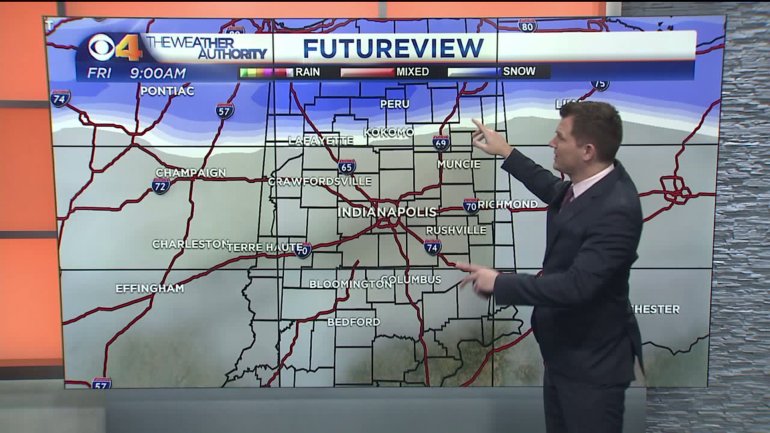 However, because there is still some uncertainty in the exact location of where that band could set up, those in central Indiana north of Indianapolis should watch this system carefully. Any small movement in the track of the system could mean a big difference in snowfall accumulation.

The weekend looks to bring slightly milder temperatures with both Friday and Saturday seeing 40 degrees. Unfortunately, light precipitation could be possible. 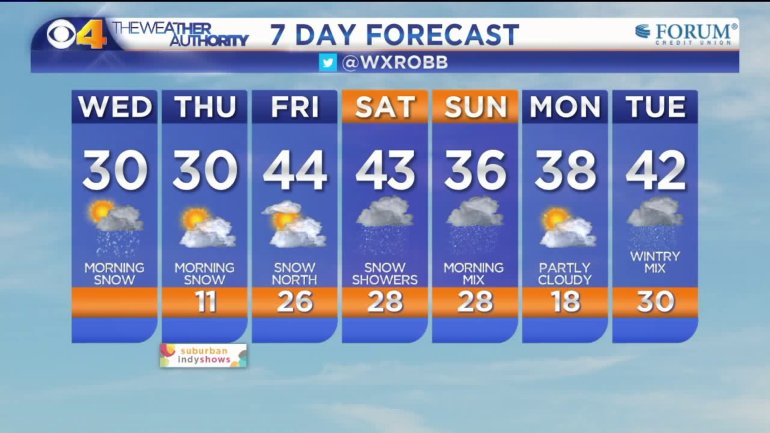 Cooler for the rest of the week; more rain is on the way

A cold front moved across the state in the afternoon and brought gusty winds and a few clouds. Temperatures began to fall late in the day and it will be colder overnight. Although it will be cooler for Thursday, the mild trend will continue as we are expecting high temperatures in the 40s and 50s through the weekend.

Another great day but a few isolated showers will develop

We're in store for another fantastic day. While we won't have quite as much sunshine as Tuesday, temperatures on Wednesday will rise back to the low and mid 50s by early afternoon. It will be breezy though and cloud cover will start to increase again, out ahead of a cold front that will start dropping in from the south this afternoon. Ahead of it, a few isolated showers could develop this afternoon but most will stay dry.

If you're looking for some time to get outdoors today, the best time will be midday. There will still be some sunshine around while temperatures rise into the upper 40s and lower 50s. By the afternoon, it will still be mild but cloudier conditions and the slight chance for a few showers makes it less ideal to be outside than earlier in the day.

We'll see one more day in the 50s Wednesday. A cold front will move across the state in the afternoon. A few showers will be possible, and temperatures will fall late in the day. Although it will be cooler for Thursday, the mild trend will continue as we are expecting high temperatures in the 40s and 50s through the weekend.