A frontal boundary exists south of the Ohio River. An area of surface low pressure will go from near Jackson, MS to Lexington, KY this evening through Sunday morning. That will spread moisture north over central Indiana.

Mid and upper-level energy will be passing from Missouri to northern Indiana during the same time period. This will help lift the moisture, eventually allowing it to start falling as rain, sleet and snow.

The determining factor for precipitation type will be temperatures from the surface to around 9,000 feet above the ground.

Temperatures at the surface are pretty easy to figure out. It will be below freezing overnight and throughout the day Sunday. High-resolution computer models suggest there will be a layer of warm air – temperatures a couple degrees above freezing – between 1,500ft and 8,500ft above the ground over places like Indianapolis, Muncie, Noblesville, Greenwood and areas further south towards Bloomington and Columbus. As the precipitation falls through the warm layer, it will melt from snow to rain. As it continues to fall towards the surface, where temperatures are below freezing, it should then freeze on contact with the ground and other surfaces, providing a thin layer of ice.

For areas further north, like Lafayette, Kokomo and Peru, the layer of warm air is not as deep. For instance, over Lafayette, high-resolution data suggests temperatures go above freezing between 3,000ft and 7,500ft. This is where we will likely see the precipitation falling mainly as sleet, wither perhaps a little freezing rain mixed in at times, and ending as snow.

Precipitation should start to move in to central Indiana after midnight and spread eastward through the pre-dawn hours Sunday.

As the precipitation moves off to the east, colder air will begin to build upwards through the atmospheric column, eventually allowing for freezing rain to change to snow before the chance for precipitation is over.

The probability of precipitation falling in Indianapolis increases after 2 a.m. Sunday. I am bracketing the hours between 6 a.m. and 10 a.m. for the highest probability of freezing rain. 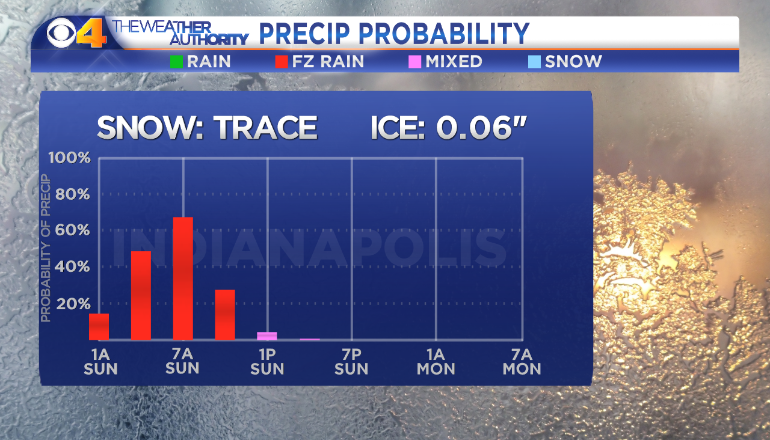 At this time I am not expecting much in the way of accumulating snow. A couple tenths of an inch is possible in an area north of a line from Terre Haute to Indianapolis to New Castle to south of a line from Veedersburg to Tipton to Hartford City. North of that area, up to an inch of snow may accumulate.

As for freezing rain (ice), a few hundredths of an inch is possible, especially over central and southern sections of the CBS4 viewing area. Here’s one of our high-resolution computer models ice accretion projection through 1 p.m. Sunday.

A 30-computer model average suggests 0.06″ of precipitation will fall in Indianapolis which would accumulate to 0.02″ to 0.05″ of ice. While that doesn’t sound like much, even a hundredth of an inch of ice can make roads, sidewalks and parking lots very slick.

The National Weather Service has issued a Winter Weather Advisory for all of central Indiana. 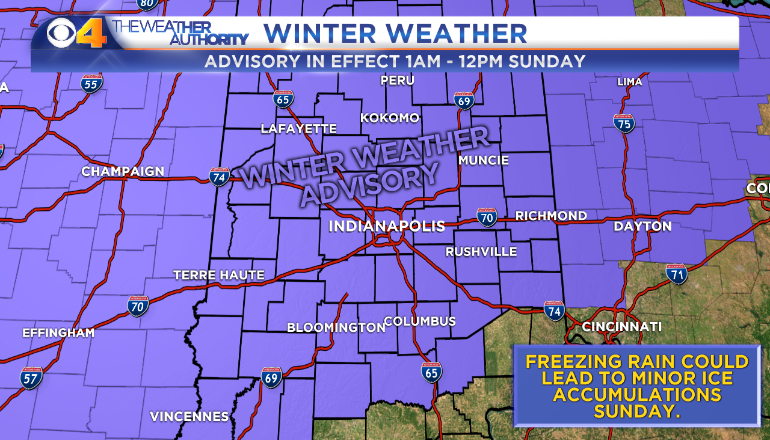 The advisories start and end at various times around central but all of them begin around 1 a.m. and end around noon.

You'll want a sweater this morning! We've been running 10-20 degrees colder than yesterday morning so quite the difference. We really should be dropping to lows just in the 50s this time of the year but most of us have already seen the 40s. The coldest air since early May will arrive Friday morning.

We can't completely rule out a stray shower this afternoon but very few of us will actually get anything. We got less than a tenth of an inch of rain in Indianapolis on Monday; our monthly deficit is still well over two and a half inches.

Finally, some rain for central Indiana and more on the way; With cooler temperatures

After two weeks without measurable rainfall a cold brought a few showers to central Indiana on Monday. Most areas received less than a tenth of an inch so we are still on target for the driest September on record. Behind the front this will be a much cooler week with highs in the 50s and 60s.

This is going to be a very active week of weather. A second cold front will move across the state and bring a chance for rain late Thursday. This will also reinforce the cool rain in place and scattered light frost will be possible Saturday morning. A third cold front will move across the state Sunday and bring another chance for rain. As with Monday's rain event, not much rain is expected with the next two systems.

Finally some rain; cooler air spilling in around central Indiana

We have a more than two and a half inch deficit for rainfall this month. We're going to get some much-needed rain today but it really won't make a dent in that deficit. We'll only get up to a tenth of an inch of rain Monday and mainly it'll just be scattered light showers.

Isolated downpours could help us get to the higher end of the rain forecast. Take along your umbrella Monday! Rain will be scattered through lunchtime with only isolated additional showers through dinnertime.

Hiker dies after posing for picture, falling 100 feet into ocean

US census to end October 5, despite court order

Shooting leads to crash on east side; 2 people seriously injured

125 companies named the best places to work in Indiana

Hiker dies after posing for picture, falling 100 feet into ocean