What a great way to end the weekend!  Hoosiers deserve warmer weather after the cold final week of January.

Temperatures rose in to the 50°s and 60°s across central Indiana Sunday afternoon.  Indianapolis is making a serious run at setting a new record high temperature for the date.  The capital city has already tied the record set in 1992, 1937, and 1883, reaching 62° at 2:11 p.m.

We aren’t done with the warmth just yet.  Temperatures will climb back in to the 50°s Monday ahead of our next weather system.  There remains some question as to how warm we could get due to cloud cover and rain, but I think middle/upper 50°s is possible.

A cold front will pass through the state Monday evening.  Along with warmer temperatures the front will also bring showers to central Indiana.  The day should start out dry but the chance for rain increases for the afternoon and early evening.

We aren’t looking at a lot of rain out of this.  A 29-computer model average suggests 0.11″ of rain will fall in Indianapolis through late Monday night. 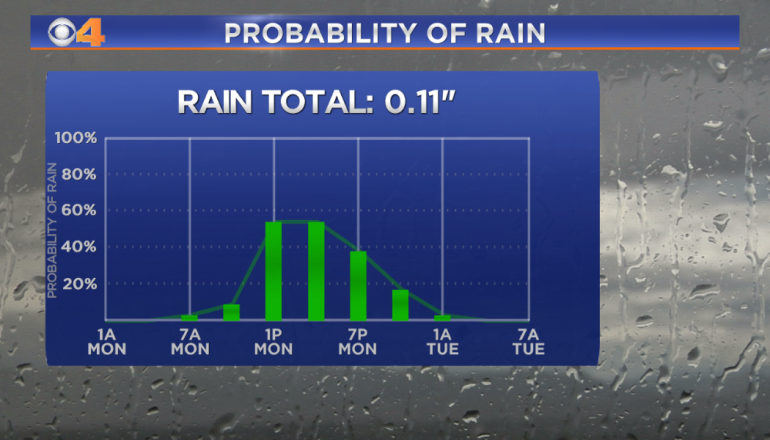 Timing wise… Rain chances start to quickly ramp up as we approach noon Monday.  The probability of rain any any point between noon and 5 p.m. in Indianapolis is 50%-57%.

We’re keeping an eye on late Tuesday night in to Wednesday morning.  Several days ago we first identified the possibility of a little freezing rain for northern areas for north-central Indiana.  This continues to look like a possibility.

Computer models suggest our next round of precipitation moves in to the state late Tuesday/early Wednesday morning.  Data suggests there will be a warm layer of air a couple thousand feet above the ground, so whatever falls from a higher altitude will melt, but temperatures at the surface will be in the lower/middle 30°s.  At this time we are forecasting a low temperature a low temperature of 35° in Indianapolis Wednesday morning.  That is obviously above freezing (32°F).  Areas north of Indy will be cooler with some potentially at or slightly below 32°.  That could cause problems as rain would freeze on the ground and other exposed surfaces.

In the above map you can see where one of our computer models project precipitation to be falling at 2 a.m. Wednesday.  Snow in the white/blue in Wisconsin/Michigan, wintry mix in the pink over Illinois/Michigan/northern Indiana/Ohio, and rain in the green, yellow and orange in Indiana/Illinois.

There are still a few days to sort this out.  There is growing trend in the computer models to move the colder air at the surface further north, which would take out the chance for freezing rain.  Be sure to keep up with later forecasts!

Another hot and humid day for Indiana. These high temperatures are about 6 or 7 degrees above average for July 6.

The heat is off to a quick start so far this summer. Today was the 8th day it has been 90 or hotter.

Heat and storms make for a difficult start to the week

We've already had seven 90-degree days this year and lots more expected in the near future. In fact, every single day of this work week will have highs in the 90s.

Last year we had an above average year with so many 90-degree days. We'll also be dealing with a heat index factor the next couple of days. We'll have plenty of dry time today but isolated storms are possible this afternoon.

Similar to Saturday afternoon, a couple of isolated showers popped up. Most areas stayed dry but more than an inch fell on the north side of Indianapolis.

Into the evening, the clouds and showers are dissipating.

Burglar finds safe haven with Camby family he took from

2 hit by car in Bloomington as protest wraps up

Semi crash on I-65 near MLK St. causes backup

Ready to pay up? Here’s what you need to know about the July 15 tax deadline

2 hit by car in Bloomington as protest wraps up

Burglar finds safe haven with Camby family he took from