We are nearly one-third of the way through Meteorological Fall but typical fall weather has yet to arrive.  In fact, it is going to feel more like July and early August for the end of September and beginning of October.

We can thank the heat due to an upper-level hot dome that will be moving over the Mississippi/Ohio River valleys.  It will send temperatures to the 90°s from central Indiana to northern Louisiana.

During this stretch of heat, it appears Indianapolis could reach 90° for three consecutive days, constituting the third “heat wave” of 2019.

It starts as early as Monday where temperatures are forecast to reach the upper 80°s to lower 90°s around central Indiana.

It looks like Tuesday will be the warmest of this heat wave.  Temperatures are projected to top out 18° to 20° above normal.  The normal high temperature Tuesday in Indianapolis is 72°.  A little simple math shows the high temperature reaching 92° 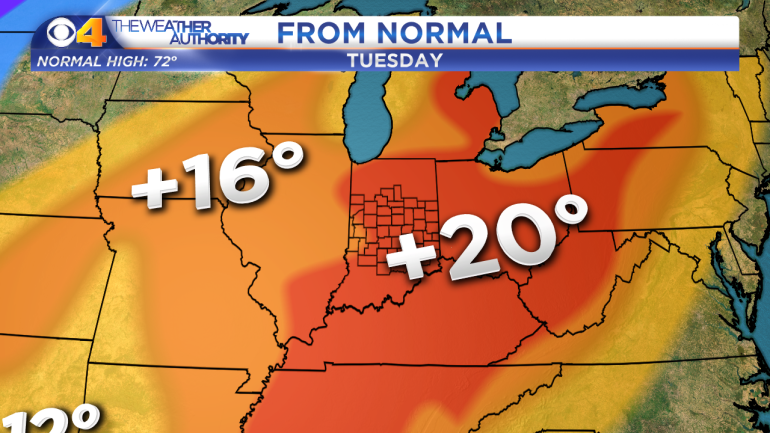 One thing that will help, as compared to July and August, is the amount of moisture in the low levels of the atmosphere.  While yes, it will be uncomfortable with dew point temperatures in the middle 60°s, we are not talking dew points in the 70°s which could send the heat index in to the lower 100°s.  Instead, the heat index is only going to be a degree or two above the actual temperature.  So the peak heat index should top out in the lower to middle 90°s.

Long range computer models suggest we get back to normal temperatures by the end of the week and in to the weekend.  It will be a big shock to the system as temperatures will drop 45° from the high temperature Tuesday to the low temperature Saturday morning.  With luck, this will be the last of needing to use the air conditioner for several months. 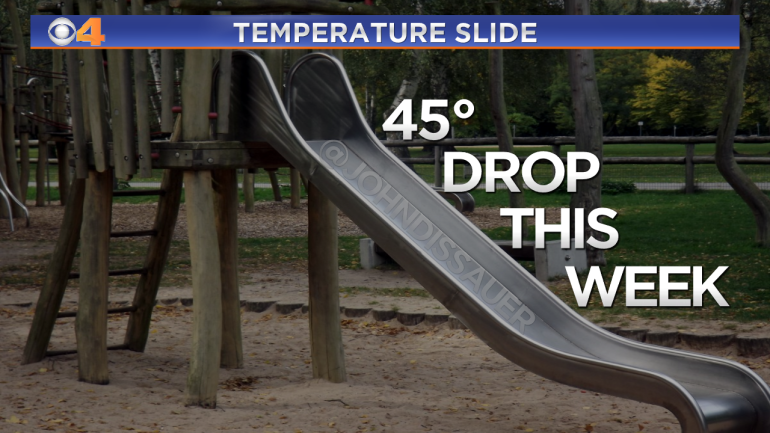 Another hot, humid day that produced pop up storms over many parts of Indiana. Storms should be dissipating by 8:30pm.

While many areas stayed dry, where it did rain, it came down in buckets for a short period of time. Many report, besides these, of 1 inch or more in about an hour.

Starting off the day warm and humid with temperatures only dropping to the 70s overnight. Dew points are about as high and there is some patchy fog across the area.

Temperatures will quickly warm to the 80s this morning with a high of 93 this afternoon. An isolated storm is possible but nothing widespread or long lived is expected.

Warm start to another hot day. Temperatures are in the 70s as you start your Tuesday and climb to the 80s by 9 a.m. Highs will again climb into the mid to low 90s with heat index values in the upper 90s.

We're continuing with this extended heat wave, so be sure to take it easy when you're outdoors. Also, look out for your neighbors! Make sure they have access to air conditioning. My own AC went out yesterday and our neighbors right away offered us a bed for the night. Hoosier hospitality!

Man who hung on to vehicle at Bloomington protest speaks out

How are cases prosecuted under the federal hate crime statute

Rides at Marion County Fair inspected ahead of Saturday opening.