A front is projected to stall out of the northern third of Indiana Sunday afternoon.  Scattered showers and thunderstorms will be possible along the front, however I think it will be a rather narrow corridor seeing rain.

For those that get rain, it could come down at a quick clip.  Overall, with the corridor, rainfall could equal 0.10″ to 0.75″ of rain.  Amounts could be higher for a few locales if rain develops and does not move.

Otherwise, temperatures will be a couple of degrees warmer than Saturday’s highs around 90°.

“BARRY” TO BRING MOISTURE TO THE HOOSIER STATE

It looks like Indiana will get a visit from what is now Tropical Storm Barry.  The system will first start to send clouds, humidity and a little wind starting Tuesday morning.  That will be followed by rain later Tuesday evening.

Rain chances from Barry will remain in the forecast through Wednesday.  Most of the rain will be out of the state by Wednesday evening.

There remains some question as to how widespread the moisture will fall over central Indiana.  However, with the tropical nature of the system, and the moisture with it, if you get under rain it will likely fall at a high rate.  Medium range computer models suggest 0.38″ to 0.99″ of rain for Indianapolis during that time period.

DANGEROUS HEAT AND HUMIDITY TO ARRIVE

It has been very warm and humid as of late but long range computer models suggest that the temperatures and humidity could go even higher by the end of the week.

There are hints that an upper-level “hot dome” could establish itself over the Ohio River Valley by week’s end.  And data suggests it does not go away quickly.  Long range data suggests the high heat and humidity from the hot dome could remain in the Hoosier state through the beginning of the following week.

Winds at the surface are projected to be out of the southwest helping pump up moisture in the lower levels of the atmosphere.  That means that humidity levels could become higher with dew point temperatures in the middle 70°s.

Combine that kind of moisture in the air with air temperatures topping out in the middle/upper 90°s starting Friday and heat indices could top out in the 110° range.

When looking even further back in to the numbers, Indianapolis has spent a total of 40 hours with a heat index of 110°+ in June, July and August since 1970.  That equals about 0.03% of the hours.

It will be important for you to hydrate with water and sports drinks ahead of the heat if the forecast remains on track over the next couple of days.  This means you should start hydrating your body starting Tuesday if you have to spend much time outdoors Thursday through early the following week.

Let’s hope the air temperature doesn’t climb to the upper 90°s with dew points in the middle 70°s for the end of the week! 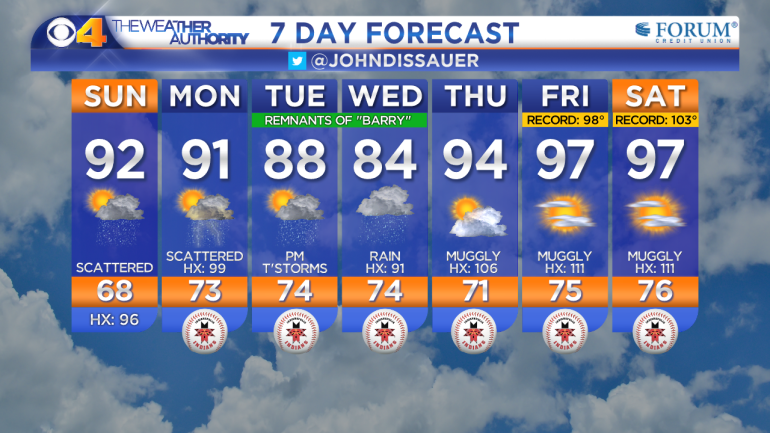 Indianapolis averages five, 90-degree days during August but so far this month we have avoided the extreme heat and humidity that are common for this time of year. Our streak of consecutive days below average has now reached nine. So far this has been a mild month with temperatures averaging five degree below what we normally see this time of year.

So far this year we have had twice as many wet weekends as dry ones. High pressure will provide dry weather this weekend with highs in the 80s.

We've spent the whole first week of August below average but we are heading back up to the humid 80s beginning this weekend. Comfortably cool this morning with many of us dropping to the 50s again. We'll warm quickly and be back to the 70s by lunchtime and briefly hit the low 80s in the afternoon. We've only hit 80 one other time so far this month but our average high this time of the year is in the mid 80s. High pressure is in control so bright and sunny start to finish today and for Saturday. The UV Index is very high so apply and regularly reapply sunscreen throughout the day.

We'll still be very comfortable on Saturday so talk about a perfect pool day. On Sunday, our wind will shift to the south and that'll allow more humid air to slide in. We'll have peak heat indices in the low 90s that day. We can't rule out an isolated shower on Sunday but most of us will stay dry the entire weekend.

Our streak of consecutive days below average has now reached eight. So far this has been a mild month with temperatures averaging five degree below what we normally see this time of year. High pressure will provide one mild day with sunny skies with highs in the 80s Friday.

US sanctions pro-China leader of Hong Kong, other officials

US reports show racial disparities in kids with coronavirus

Postal Service loses $2.2B in 3 months as virus woes persist

Stuff the Bus campaign taking place over the weekend

Times of sun and clouds Precip: 30%

Indianapolis man dies in single-vehicle crash on I-465

Gov. Holcomb: Indiana will allow moratorium on foreclosures, evictions to expire on Aug. 14

US sanctions pro-China leader of Hong Kong, other officials

US reports show racial disparities in kids with coronavirus

Postal Service loses $2.2B in 3 months as virus woes persist