Temperatures have been slowly falling throughout central Indiana today.  Temperatures started the day – not far after midnight – in the low 50°s over the southern half of the state.  All of central Indiana is in the middle/upper 30°s as of 6 p.m. Sunday.

An area of low pressure is moving east/southeast over eastern Indiana in to western Ohio.  Around the low, scattered showers continue to fall.  There have also been several reports of snow showers mixing in, including a dusting of snow – mainly on elevated surfaces – in parts of eastern Indiana.

A rain snow mix will continue to spread over central Indiana Sunday evening in to Sunday night.  As temperatures continue to drop throughout the atmospheric column rain will begin to dwindle and snow will become the primary precipitation type.

Precipitation will become much more isolated by Monday morning.  A few lingering snow showers can’t be ruled out through mid-morning.

At this time it appears only a couple tenths of an inch of measurable snow will be possible by late Monday morning.  I think there will be many more “have not’s” than “have’s” when it is all over. 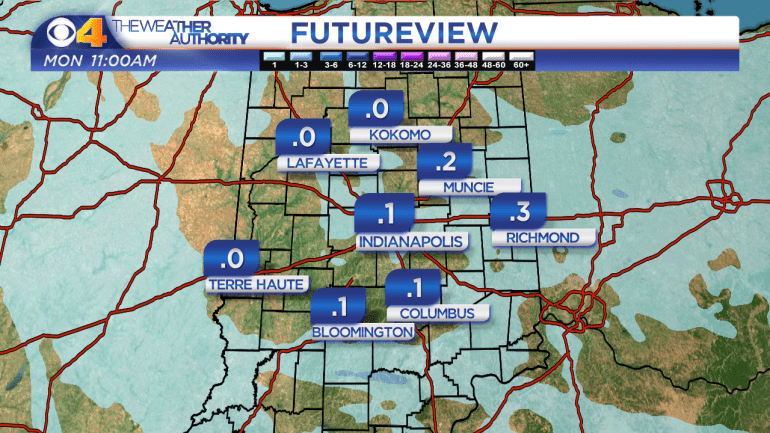