A wave of energy is passing through the upper-levels of the atmosphere Thursday evening.  It is producing showers and a few thunderstorms over parts of the central United States.

The wave will continue to move east through the overnight, passing over central Indiana Friday morning.  This may generate a couple of showers for the western third of central Indiana during the morning.

What rain develops will struggle to hold together as it moves east through the state.  I suspect much of the rain will begin to fizzle out by noon.  However, a few spotty showers and a thunderstorm cannot be ruled out.

By late afternoon the majority of central Indiana will be rain free.

This will not be a big rain producer for anyone in the CBS4 viewing area.  I think at most there could be a few hundredths of an inch of rain, nothing to help with the lack of rain we’ve had since July 22.

Another upper-level wave will pass through the state Saturday morning.  This could bring heavier, more widespread, rain to the southern half of the state.

Medium-range computer models differ on exactly how the rain will pass over the state with regard to location.  I suspect we’ll have a band of showers and thunderstorms passing over southern Indiana, especially near the Ohio River, during the morning.  The rain may begin to lift north by late morning and then be north of central Indiana by early afternoon.

Once the rain departs, there should be some brightening of the skies sending temperatures in to the middle and upper 80°s.  Add in higher dew points and that will send heat indices – the feel like temperature – in to the lower 90°s.

Long range computer models suggest the heat will be around through the weekend and in to early next week.  Combine that with dew point temperatures near 70° and heat indices could climb to the middle 90°s by early next week.

Heat and humidity looks to stick around until a cold front passes late Wednesday.  Models suggest cooler, much drier air should filter in to the state behind the cold front. 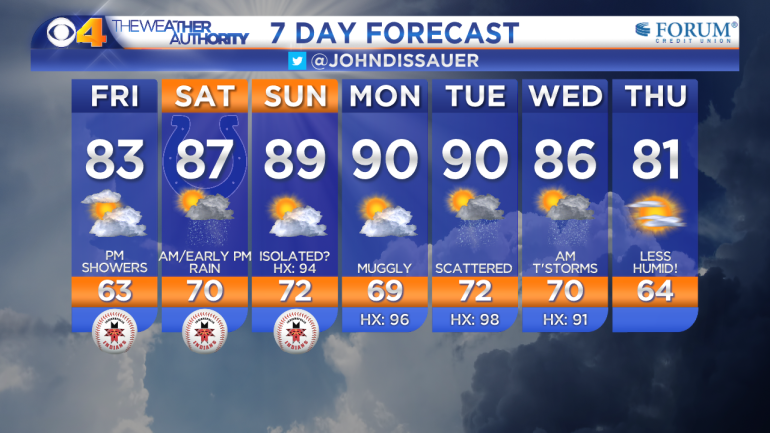