A cold front draped through the central United States will slowly move east over the next 84 hours.  Ahead of the front, winds will gust to 25mph out of the south and temperatures will climb back to the mid-70°s Sunday.

As the front gets closer to Indiana, rain will begin to enter the state from the west.

While an isolated shower cannot be ruled out in the western half of Indiana Sunday afternoon, most of the rain should hold off until late Sunday afternoon, spreading east through Monday morning.  (I suspect rain will arrive in the Indianapolis metro after 7pm Sunday.)

The rain will increase in coverage Monday and may be heavy at times throughout the day.

Rain is expected to fall through Tuesday.  Computer models are spread when it comes to how much rain will fall.  An 82-computer model average suggests 1.37″ of rain will fall in Indianapolis through 7am Tuesday.  The range goes from 0.58″ to 2.20″ (as seen in image below).

We may see a widespread frost coming to portions of central Indiana Wednesday morning as temperatures drop in to the 30°s.  Stay tuned! 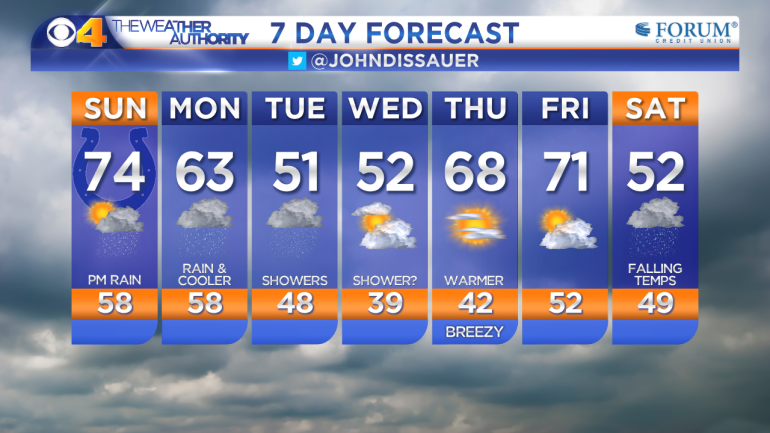 Cloudy today; the sun will come out tomorrow

Only a couple of degrees colder than we were Monday morning but certainly feeling chilly. Could have some sprinkles this morning but the rain will remain light and scattered. Isolated showers possible south of Shelbyville.

Zeta should strengthen back to hurricane status today. The Category 1 hurricane will then trek through the Gulf and make landfall on the LA/MS coast Wednesday evening. The weakening system will then turn NE.

Chilly start to the morning but rain chances stay low until late in the afternoon. Daytime hours could support a sprinkle or two but not really enough to justify an umbrella. You will want an umbrella for the more substantial rain after 5 p.m.

The evening rush hour could end up being difficult for some as we watch rain spread across the area. Rain could be heavy at times but totals for the next 24 hours should stay under a half inch.

This will also be a wet week. Expect a cloudy Monday with showers by afternoon. Heavier more widespread rain is likely Monday night through Tuesday and up to half-inch of rain is likely.

Cloudy and cool across central Indiana; Hurricane Zeta zeroes in on the Gulf Coast

Full moon expected on Halloween for first time since 1944

How political campaigns are able to text you with personal information

Want to see the Colts in person this season? Enter to win 4 tickets

Cloudy and cool across central Indiana; Hurricane Zeta zeroes in on the Gulf Coast