The initial wave of precipitation will fall as a wintry mix of mainly snow and sleet will be possible over south-central Indiana.  That will quickly change over to all snow as it moves in to the I-70 corridor.  The band of snow is projected to continue moving east.

At this time this system does not look to be a significant snow maker.  An inch or two of snow is possible, mainly north of I-70, through Sunday evening.

I am also watching the potential for a little freezing rain mixing in with the wintry mix over the south-central Indiana.  When it comes to freezing rain a couple tenths of a degree at various altitudes of the atmosphere can play a significant role.

A couple computer models have Bloomington, Columbus, Bedford and Seymour on the edge of having a little freezing rain late Sunday morning.  While I am not expecting much ice accretion, even a little can make things slick.

The image above is the forecast ice accretion from the North American Mesoscale computer model.  This computer model is known to often over-play weather events, so take it with a grain of salt, but you can see how it tries to put down a small amount of freezing rain.  It is something to keep an eye on Sunday morning.

Rain will move back in to central Indiana late Sunday night in to Monday morning and will fall through Tuesday.  This isn’t something many Hoosiers need following last week’s rain.

Medium-range computer models project 1″ to 2.5″ of rain possible for portions of the state.  Most models are targeting the southern half of the state for the highest amounts.

Because of the projected rain coming to the state, and the already saturated ground/rivers, the National Weather Service has issued an areal Flood Watch for the counties shaded in green (see above map).  The watch will be in effect from 1am Monday through 7am Tuesday. 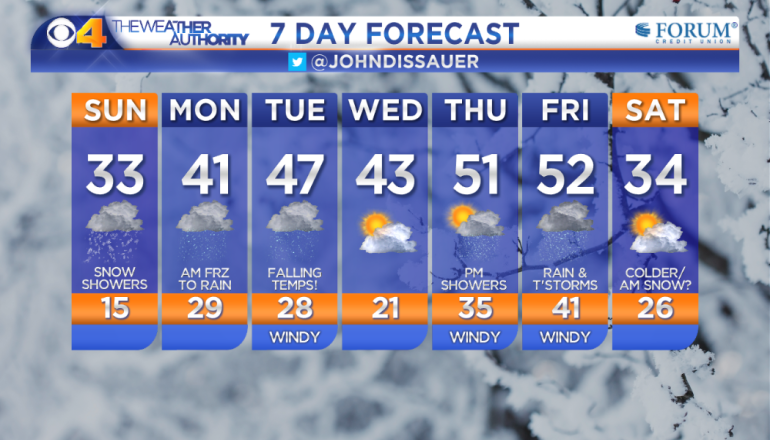 Tracking rain showers Friday with a dry weekend ahead

Isolated showers will move through central Indiana through 8 a.m. Between 8 a.m. and 2 p.m. storms will fire up and move through. Storms will be more isolated after 2 p.m. with mostly dry hours through the evening.

The cold front moving through now will switch the wind direction to the north west Friday. This will mean an end to the 80s for a while. Friday's highs will be in the mid-70s. The next few evenings will be great for opening up windows to let in some fresh air and mornings will be perfect for running.

The Omega Block weather pattern that has been with us through most of the week is finally starting to break down. This weather setup has given a warm, humid week with frequent rainfall. The jet stream will finally push a cold front across the state Friday and bring an end to the warm, wet weather.

Scattered thunderstorms will move across the state overnight into Friday morning and bring up to half-inch of rain The rain will end by lunchtime and skies will clear Friday afternoon. For the weekend expect sunny and lower humidity with low temperatures in the 50s and high temperatures in the 70s.

Rainy next 36 hours; cold front to drop temperatures for weekend

Rainy start to the morning in central Indiana. Scattered showers with some downpours will continue to slide north through our area as a low nears. We're expecting rain to be on and off Thursday through Friday morning, so umbrellas needed and rain boots recommended.

$2.4 million worth of meth hidden in saw machine, CBP says

NCAA offers plan to bring athletes back to campus

Gov. Holcomb, officials continue to encourage social distancing: ‘Our actions have to change’

$2.4 million worth of meth hidden in saw machine, CBP says