From the National Weather Service: 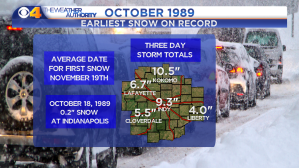 Below is an excerpt about the storm from the National Climatic Data Center’s Storm Data publication:

“An intense upper-level low pressure system was anchored over the Missouri bootheel which allowed warmer, southerly winds to override colder surface air over Indiana. Snowfall began to accumulate on grassy and exposed areas as the air temperature hovered near freezing. By 0700 EST, accumulations of five to six inches were recorded from across central Indiana, and elevated roadways and bridges were becoming ice covered. The ice conditions became only wet by late morning as the temperatures rose to the middle thirties and road crews had spread salt on affected areas. Another problem was the wet, heavy snow was the large accumulation on power lines, and especially on trees, since many trees still had a substantial number of leaves. Scattered power outages were reported from across central Indiana…”
“The axis of maximum snowfall was from South Bend to Indianapolis to Bedford (Lawrence County). The maximum snowfall was 10.5 inches at Kokomo in Howard County.”

Indianapolis has tallied 11, 90-degree days so far this summer and more heat is on the way.So far July has been 4 degrees warmer than normal and so far this Summer is 4 degrees warmer than last year. We have already had one, 7-day streak of 90-degree days and another one is on the way. Te extended forecast is calling for high temperatures to reach at least 90 degree for the next seven days.

Abnormally dry soil conditions exist across the state and we could use some rain. We'll have a daily chance for scattered afternoon and evening storms from Thursday though early next week.

Waking up very comfortably in the 60s with lots of sunshine this morning. Dew points are right at 60 so not too muggy at all.

The light breeze out of the north will be switching to the south and that'll pump in more heat and humidity by the afternoon and especially noticeable by Wednesday.

A fantastic evening; getting much hotter and more humid

We're kicking off a new week with lots of sunshine and seasonally warm temperatures. High pressure nearby is keeping skies mostly clear Monday evening and temperatures peaked near the average for this time of year, in the mid 80s.

The cooldown is welcomed after spending seven straight days in the 90s last week. Dew point temperatures have dropped to more comfortable levels, which helped drive temperatures down to some of the coolest numbers we've seen in nearly three weeks.

12-year-old boy airlifted to hospital after shooting in Kokomo

First coronavirus vaccine tested in the US headed to final testing

Philadelphia protesters sue city over tear gas, use of force

Teachers share perspectives as schools announce reopening: ‘Will I take it home to my family?’

Man shot, killed on I-465 in Indy; police put out suspect, vehicle description

12-year-old boy airlifted to hospital after shooting in Kokomo