The arctic blast has moved into the state and kept out highs in the 30s for the past two days, has moved east. Temperatures were not as chilly on Thursday and highs will stay in the 40s for the next two days. We’ll have mostly cloudy skies with chance for a few showers Friday.  Over the weekend we’ll have more rain developing Saturday afternoon that could change to snow Saturday night. Sunshine will return for Sunday and we’ll also have another chance for snow early next week. 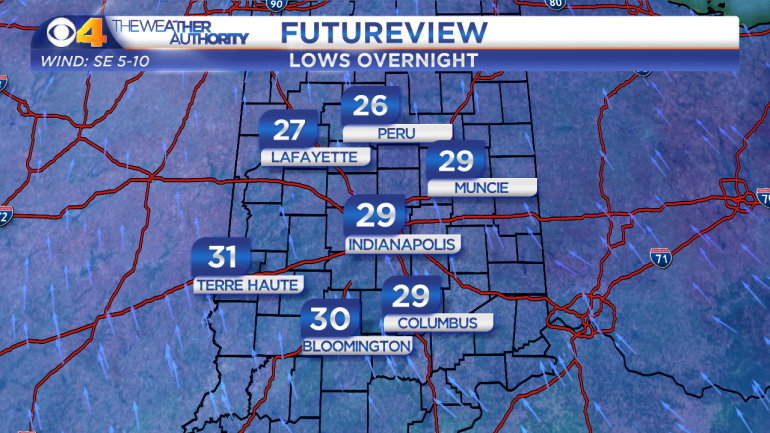 Lows will be in the 30 overnight. 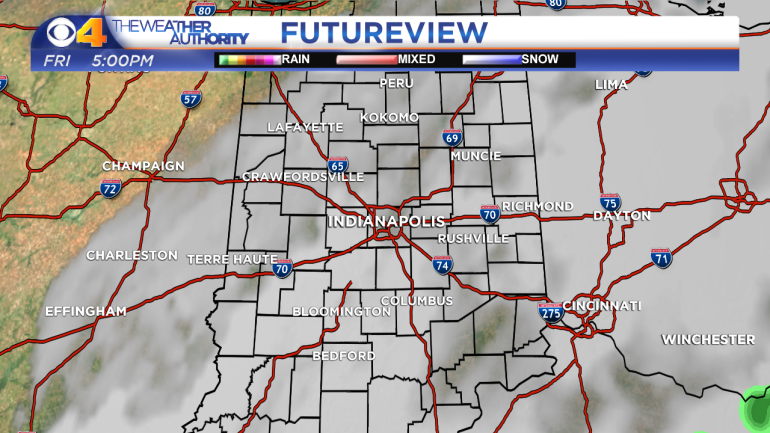 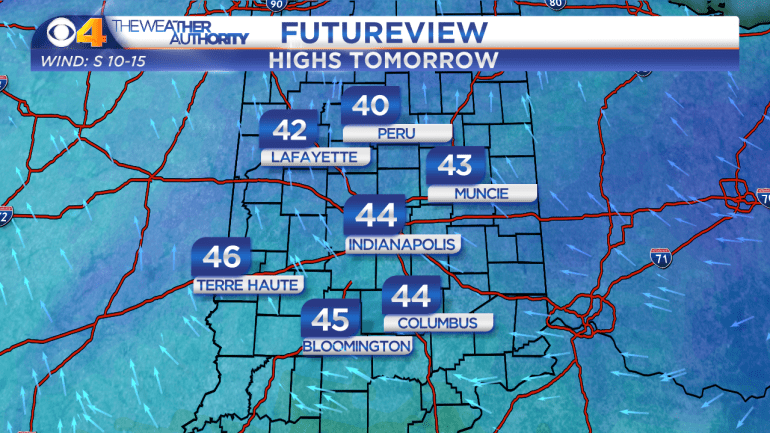 Highs will be in the 40s Friday. 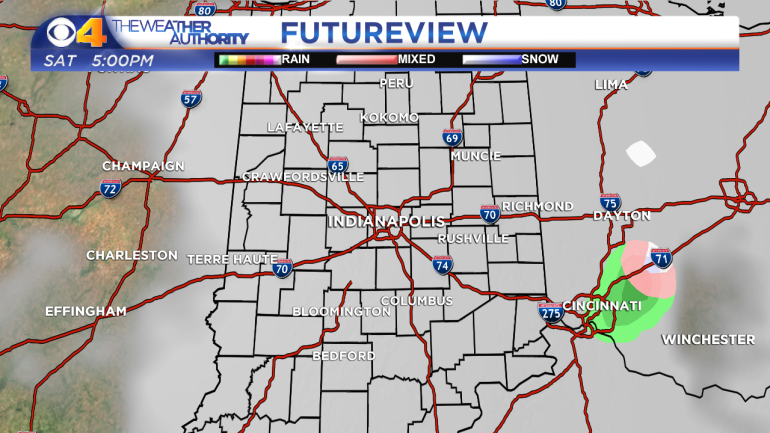 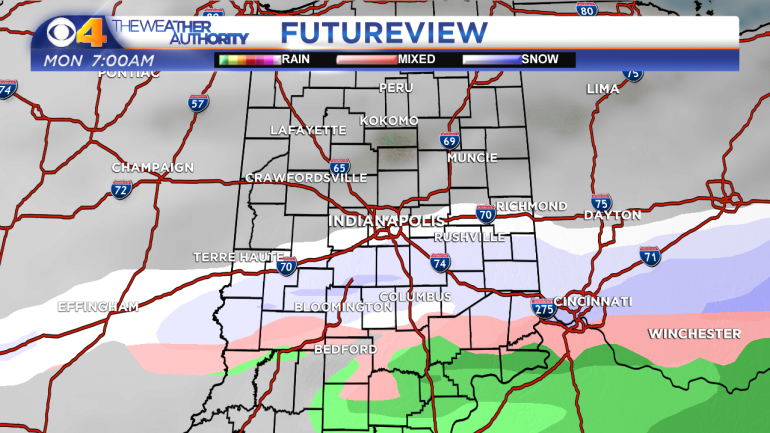 We’ll have rain and snow Monday. 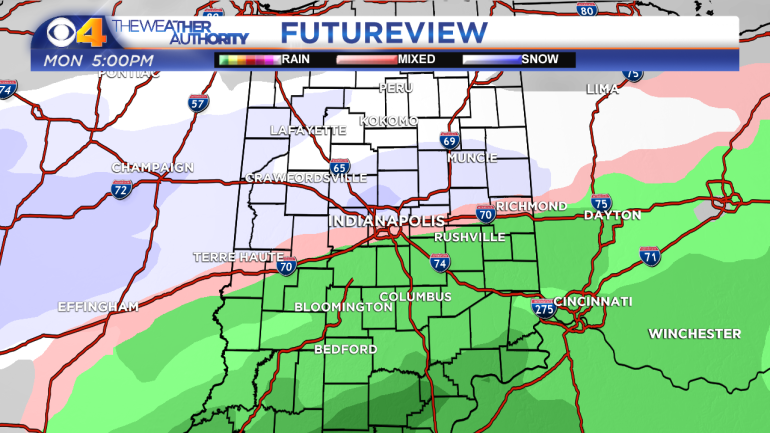 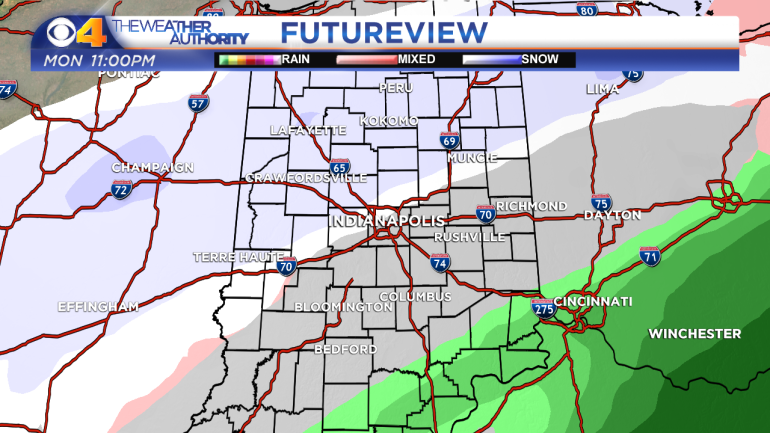 Finally, an extended stretch of dry weather for central Indiana

March will will end with 19 days of above average temperatures and 12 days cooler than the norm. We had 4.66" of precipitation, a full inch above average. So far this year Indianapolis has only had two, five days stretches of dry weather, once in February and once in early March.

The forecast is calling for another five-day dry spell this week. After a few morning clouds we'll see sunny skies and highs in the 50s Wednesday. Temperatures will warm into the 60s on Thursday and Friday under sunny skies.

Cooler with sprinkles Tuesday; nice stretch of weather to follow

Tuesday is looking rather gloomy as clouds continue to thicken. Temperatures are in the low 40s and the 30s, so jackets will be needed. Highs today will only get into the upper 40s, which will feel noticeably cooler than yesterday's 60.

We will have a couple of sprinkles this afternoon and evening, but rain totals will stay minimal so not really enough to justify umbrellas or rain boots. A hooded coat will be just fine.

Expect a cloudy, cool Tuesday with a few spotty showers

Cooler has air moved into the state and temperatures will stay below average for the next 48 hours. Lows will cool into the 30s for the next two nights. Another weak system will move across the state Tuesday and bring clouds with a chance for a few showers mainly south of Indianapolis.

We'll stay cool and dry Wednesday and Thursday with highs in the 50s. Our next chance for rain will arrive late Friday. Saturday will be a soggy day with the rain ending early in the evening. Saturday. Sunday will be dry. Expect highs in the 60s this weekend.

Hancock Health moves to e-visits, provides technology for those without access

Are you immune to COVID-19 once you get it? Butler health expert weighs in on common questions

Social distancing could be slowing the spread, but there’s more work to do

Hancock Health moves to e-visits, provides technology for those without access

Are you immune to COVID-19 once you get it? Butler health expert weighs in on common questions

Social distancing could be slowing the spread, but there’s more work to do