A cold front located in Canada will slide through the area late Monday afternoon/evening.  Along the front, scattered showers, and a few thunderstorms, will be possible, mainly late afternoon through early evening.  The best chance for rain will be over northern/northeastern portions of the CBS4 viewing area.

We should see a warm-up ahead of the cold front, temperatures topping out in the upper 70°s to lower 80°s Monday afternoon.

Behind the front, winds at the surface will turn out of the west-northwest and become northwesterly in the upper-levels of the atmosphere.  This will allow cooler, drier air to move in to central Indiana.  Temperatures may struggle to get out of the 60°s Tuesday.  Also notable, dew points will take a dive meaning we should feel much lower humidity through mid-week. 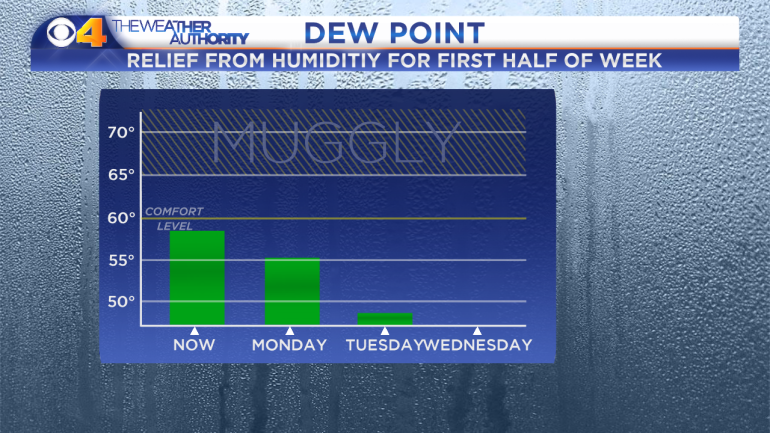 Scorching heat was in the western United States Sunday afternoon.  At 6pm ET, temperatures were in the 90°s in Seattle, Washington and Boise, Idaho.  The temperature was approaching 110° in Las Vegas.  Yet, in Los Angeles the temperature was only 63°. 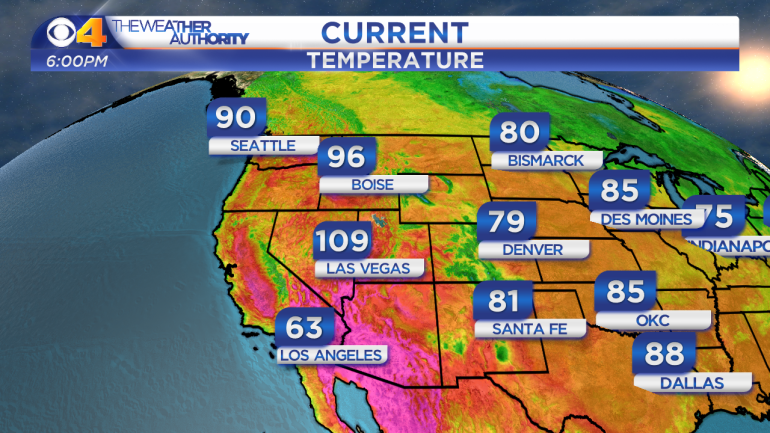 The upper-level ridge over the western third of the United States will start to move east as we start the work week.

As the ridge moves over the central United States, heat will begin to build through the central and northern Plains states.

Long range computer models suggest the ridge will move over the Midwest Friday, Saturday and Sunday.

At this time, it appears we may make a run at the first 90°+ day of the year in Indianapolis Saturday.  We may also hit 90°+ again Sunday. 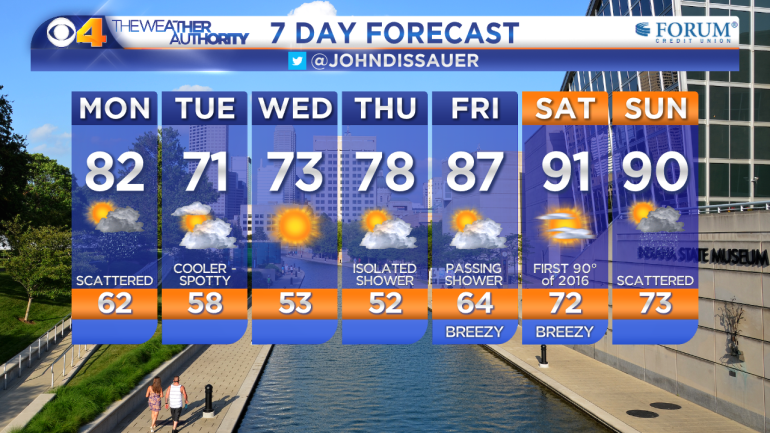 It is that time of year when we are REALLY ready for some outdoor fun. there will be showers, but they will not last too long each time they move through. With an umbrella, you should be OK. Round one of showers is in the Indy and Lebanon areas about noon. Showers are moving north at 30 MPH. More showers and heavier rain in Eastern Indiana this afternoon. Late afternoon…

A wet weekend with cooler temperatures for central Indiana

This had been a dry month with no rain for the first six days of the month. A large area of low pressure is now in control of our weather and we've had cloudy, wet weather for the past three days.

Our weather will stay unsettled with a daily chance for scattered showers and thunderstorms in the forecast through the weekend. Showers will develop Saturday morning and thunderstorms will spread heavy rain across the state Saturday afternoon. Winds will also be strong with 25-30 mph gusts likely.