Big changes are coming to central Indiana as a developing storm is passing through the Rocky Mountains.

The storm will come out of the Rockies and an area of low pressure will develop in the lower levels of the atmosphere – bringing MUCH warmer weather to start the week.  An associated cold front will pass through the state Tuesday allowing Arctic air to infiltrate central Indiana mid-to-late week.

Temperatures will run 18° to 24° above normal Monday with high temperatures in the lower to middle 60°s.

A few spotty showers will be possible by late afternoon ahead of the approaching cold front.

As the cold front gets closer to the state, a line of rain and an occasional thunderstorm will move in to the state late Monday night in to early Sunday morning.

You can see in the animation above, computer models push the rain out of central Indiana prior to Monday morning’s rush hour.  I think that will be the case (rain ending before the morning commute).

There remains some question as to the strength of the cold air coming in to the state mid to late week.  Computer models suggest highs in the upper 20°s a couple days and morning lows in the teens.  The question comes from the lack of snow cover over the upper Midwest, and for that matter, the continental United States.  Last week I wrote a story about how bare ground may impact just how cold the air could be.

Computer models have been trying trying to bring a couple clippers through Indiana late week and next weekend.  There has been little consistency regarding the timing of the clippers.  As of the timing of my writing this, Friday night in to Saturday morning will need to be watched for the potential for snow (more than flurries).  Stay tuned! 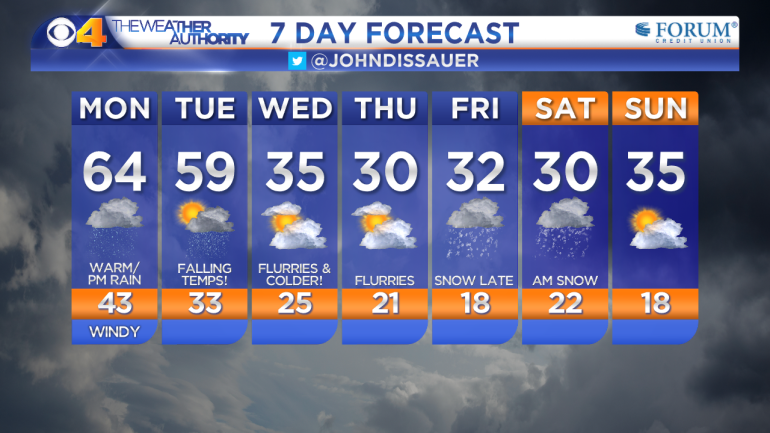 Prepare for much colder changes today as our next system moves into central Indiana. We’re already seeing a light rain/snow mix over our northernmost counties this morning.

This wintry mix is going to travel southeast across the area as the day continues. It will first fill into our northwestern zone by midday then approach Indianapolis middle part of the afternoon.

Freeze Warning in store for central Indiana with mix of rain, snow

A taste of winter returns to central Indiana this week. Rain will develop Tuesday morning, and high temperatures will range in the mid-to-upper 40s.

Mild start to the week; tracking rain and snow Tuesday

Expect the best weather of the week today! We are starting off the workweek with clear skies and cool temperatures around central Indiana. Lows dipped down in the lower to mid-40s early in the day.

Temperatures will rise quickly through the early afternoon and eventually peak in the mid-60s! Enjoy the pleasant weather while it lasts because we’re going to have another taste of winter this week!

While You Were Sleeping: Coronavirus updates for April 20

Jaswinder Singh: remembering one of the eight victims killed in the FedEx shooting

2-year-old dead after being struck by truck in Greenwood