Humidity surges, along with temperatures, Wednesday ahead of a cold front. The front is located approximately 700 miles from Indianapolis as of Tuesday evening. 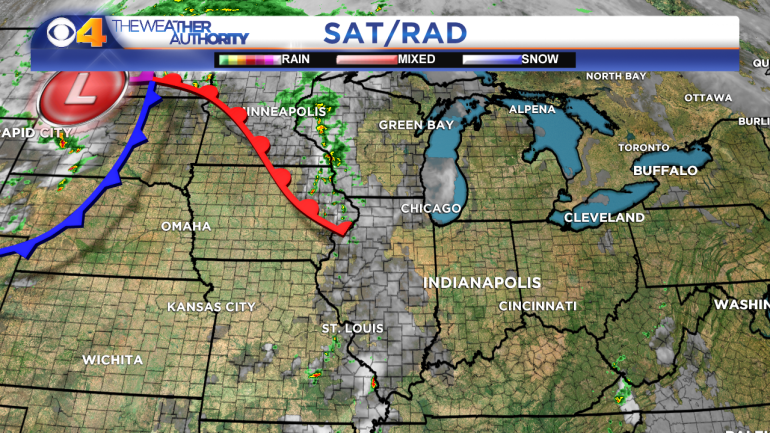 A narrow line of decaying thunderstorms may enter western portions of Indiana around sunrise Wednesday morning, bring a small chance of rain for some.

Temperatures will quickly warm up through the day with high temperatures topping out in the lower to middle 90°s – thanks in part to compressional warming from the cold front approaching central Indiana.

Once you factor in the higher humidity, the heat index will climb to the upper 90°s to around 100° by late afternoon.

With the amount of heat and humidity in place, the atmosphere should become very unstable, especially late afternoon and in to the evening.

The one thing needed to get thunderstorms going in this kind of environment is some lift.  We can get that from the cold front, however the problem is that the front is not expected to move through central Indiana until late Wednesday night in to early Thursday morning.  We will have to keep an eye back in to Illinois to see if a line of thunderstorms flares up and moves in to Indiana Wednesday night.

At this time there is some question if a line of thunderstorms can make it in to the Hoosier state. 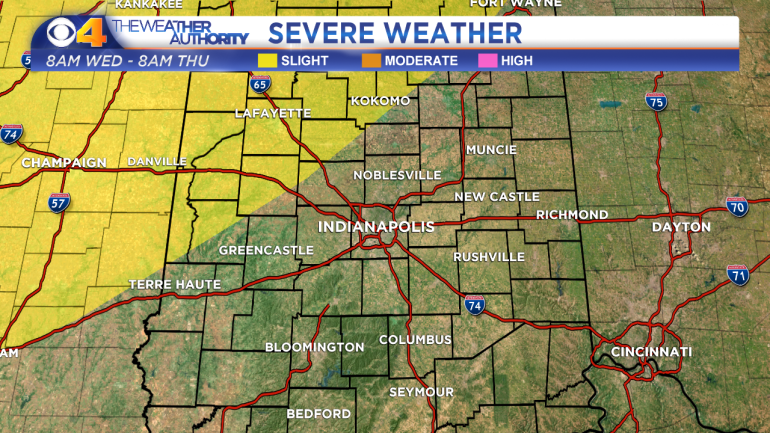 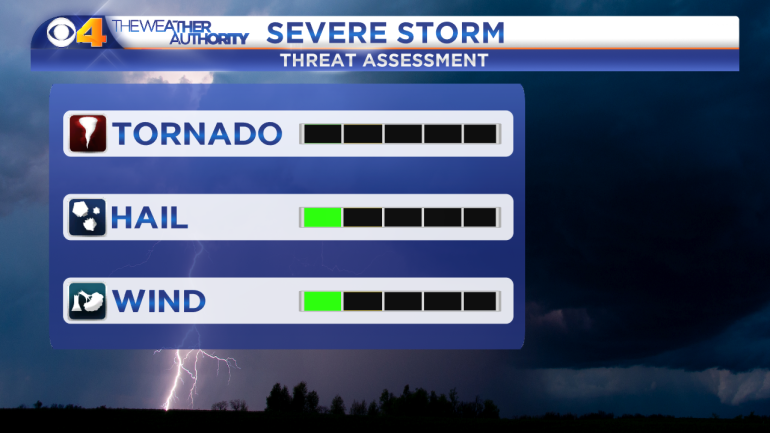 If we do have thunderstorms in Indiana during the afternoon and in to the night, the main threat will be damaging winds and small hail.  The storms will also have the potential to drop copious amounts of rain if you get caught underneath one.

If you’ve thought it has felt humid this month you aren’t wrong.  I went back and looked at hourly weather observations over the previous 30 years.  It turns out that this ranks as the 4th highest humid July to date in 30 years for Indianapolis.  I defined “humid” as the number of hours spent at or above a 70° dew point temperature.  Through 6 p.m. Tuesday the capital city has spent 121 hours with 70°+ dew points this month.  In comparison, the 30-year average is 54 hours.

The cold front that passes early Thursday morning will bring some relief in the humidity Thursday and Friday.  While it won’t completely dry out the air, dew points will fall from the 70°s Wednesday to the middle 60°s Thursday evening to the upper 50°s by early Friday morning.

Humidity will begin to come back Friday night and stick around through at least the middle of next week as dew points are projected to rise in to the lower and middle 70°s.  Combine that with temperatures in to the lower 90°s this weekend through early next week and the heat index – or the feels like temperature – should top out around 100°.

We will keep an eye on what could become Tropical Storm Barry, along the Gulf Coast, to see if it will impact central Indiana.  Long range computer models suggest it could bring rain to central Indiana middle of next week. 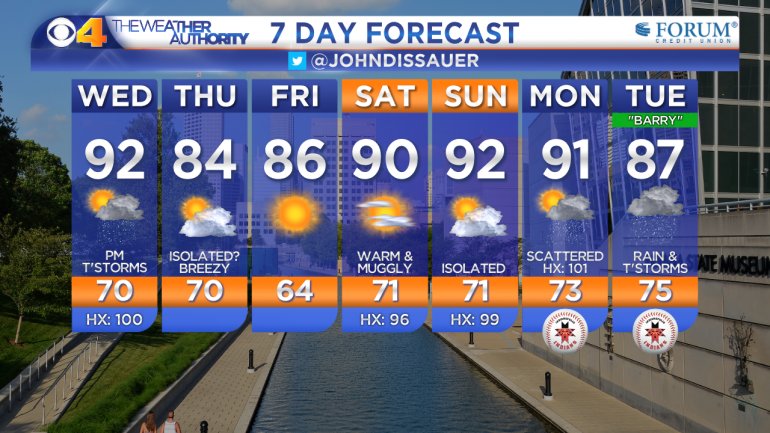 We are starting our Wednesday off a couple of degrees colder than yesterday. Wind chills will be in the teens through the morning and it won't feel much more than the 20s although the actual air temperature will reach the low 30s.

We could have flurries as early as 10 a.m. but the substantial snow won't arrive until closer to 3 p.m. The snow will spread across the area but will be more of a problem for our southern counties.

OMAHA, Neb. (AP) — A major winter storm dropped more than a foot of snow on parts of Nebraska and Iowa, disrupting traffic and shuttering some schools, while blanketing other parts of the middle of the country with snow that continued to fall Tuesday.

There were early closures of several coronavirus testing sites on Monday in Nebraska and Iowa, and both states saw 12 or 13 inches (30.5 to 33 centimeters) of snow in places by Tuesday morning. At least 4 inches (10 centimeters) of snow was expected into Tuesday across most of an area stretching from central Kansas northeast to Chicago and southern Michigan.

Foggy and slick start; another wintry mix ahead

A wintry mix overnight has left us slick for the morning commute. We also have fairly dense fog limiting visibility down to a mile, so be cautious and don't try to rush.

We already had a report out of Boone County where a car slid off the road trying to go around a corner.

Is the home market about to level off?

Biden ‘bringing back the pros’ for virus briefings

Biden oath behind only Reagan and Obama among TV viewers

Indiana gets failing grade for preventing tobacco use