What a way to close out the weekend.  Sunny skies and record breaking temperatures.  Indianapolis topped out at 63° Sunday, breaking the previous record – 61° set in 2016. 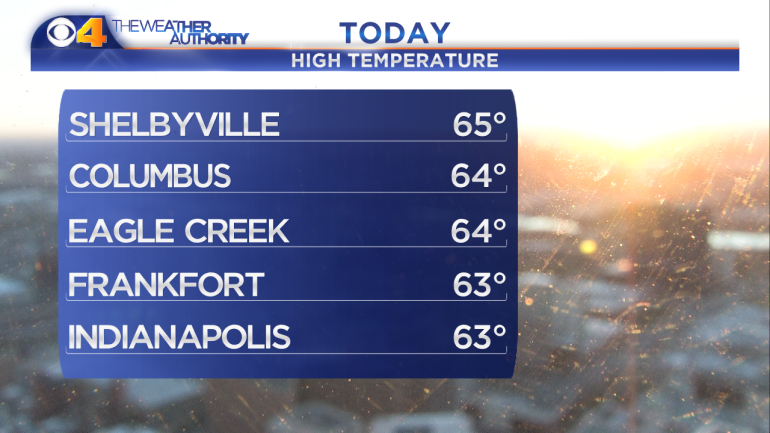 Clear skies overnight and a lightening wind will allow areas of fog to develop by sunrise.  The fog could limit visibility to less than a mile at times for the Monday morning commute.  I would not be surprised if there are a few school delays due to the fog.

Data suggests visibility will be slow to improve through the morning.  Once it does, higher altitude clouds will begin to stream over the Hoosier state.

Even with mostly cloudy skies, temperatures will once again climb back to the upper 50°s to near 60°.  Winds will be gusting at times over 20 mph.

Similar to the way we ended January, clouds will hang around for the remained of the workweek and in to the first half of the weekend.  Scattered rain showers are projected to arrive Tuesday morning.

A few computer models suggest light precipitation hanging around late Tuesday night in to Wednesday morning.  This could be problematic as temperatures at the surface are forecast to drop to 30°.  Temperatures a few thousand feet above the ground are forecast to be above freezing for parts central Indiana.  If that does become the case, there could be areas of light freezing rain for parts of the area Wednesday morning.  This is something that will need to be monitored.

I’m also keeping an eye on a “potential” weather system that could bring snow to central Indiana for the start of next weekend.

This system is projected to run along/near the Ohio River through Kentucky and Illinois.  With cold air forecast to be in the area (lows in the 20°s and highs only in the mid-30°s) this has the potential to produce snow.  Many questions remain with this system but stay tuned!

Founded by an Olympian, Eat The Frog Fitness celebrates …