Skip to content
Watch Live
Watch Live
CBS4 News at 5
This is an archived article and the information in the article may be outdated. Please look at the time stamp on the story to see when it was last updated.

Everything continues to look on track for a winter-mess in central Indiana for the start of the work week.  A cold front is passing through the state Sunday evening through Monday morning.  Behind the cold front, much colder air will filter in changing rain over to snow.

It still looks like we will have light rain showers around central Indiana for the morning commute.

Temperatures will dropping from the 40°s to the 30°s from northwest to southeast.  As temperatures throughout the atmospheric column drop below freezing, rain will begin to change over to snow.  It appears the changeover will begin happening between noon and 1 p.m. in the Indianapolis metro – with it happening earlier on the northwest side and later on the southeast side.

As the cold air moves southeast, more of central Indiana will be under snow showers during the afternoon.  All of the CBS4 viewing area should be all snow for the evening commute.

Snow will start to come to an end by early evening (northwest) and by midnight (southeast).  Arctic air will grab hold behind the snow, dropping temperatures that will be cold enough to threat record low temperatures.  More information on the cold air coming in behind Monday’s system can be found in my article from Saturday.

I have made some minor tweaks to the snow forecast.  Computer models are coming in a little heavier with the amount of liquid available to produce snow along with forcing in mid-levels of the atmosphere, which could aid in a period of heavier snow. 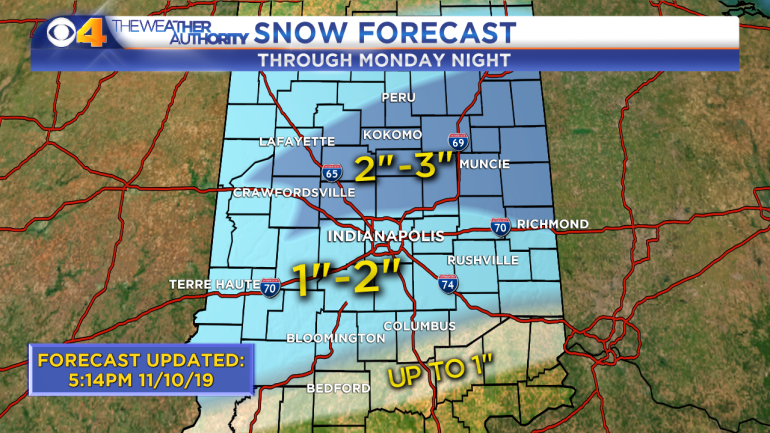 Generally speaking, most of central Indiana should pick-up 1″ to 2″ of snow.  As of Sunday evening, it appears there could be an area that could receive 2″ to 3″ of snow and some isolated pockets up to 4″ is not out of the question.

There remains several questions in regards to how much snow will accumulate – Ground temperature? How quickly does the changeover occur?  Timing of the cold air?  Does the origin of the cold air help to fluff up the snow?

While this storm is not expected to produce high snow totals, with this being the first snow of the year, the timing of the snow, and drivers not used to driving in the snow the National Weather Service has issued a Winter Weather Advisory for the counties shaded in purple in the map below.  The advisories are in effect from 10 a.m. to 8 p.m. Monday. 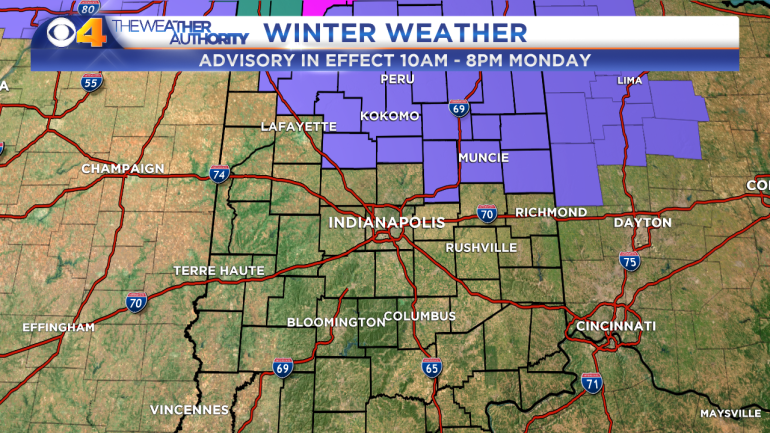 How much is forecast to accumulate is subject to change as more data becomes available.  Be sure to check back for updates both online and on-air.

Central Indiana will see slight risk for severe storms Wednesday afternoon through the evening. The main storm threats will be damaging straight-line winds and large hail. There is a low risk for a tornado.

June is our third wettest month of the year. We also average 4 tornadoes during June and the month month is known for tornado outbreaks. After a mild start to the month warmer temperatures, higher relative humidity and a great chance for rain will be with us for the rest of the work week. High temperatures will be in the middle 80s and we'll have a daily chance for rain from Wednesday through Friday. 1 to 2 inches of rain is likely this week.

After a mild start, June is going to heat up and rain chances will rise

This meteorological Spring (March 1st through May 31st) will go into the record books as a cool, wet season. Indianapolis received 13.53" of precipitation, more than an inch above average. The extra rain kept us cooler and temperatures were below average. May was a wet month with over seven inches of rain, more than two inches above average.

After a dry mild start to June warmer temperatures, higher relative humidity and a great chance for rain will be with us for the rest of the work week. High temperatures will be in the middle 80s and we'll have a daily chance for rain from Wednesday through Friday. Up to an inch of rain is likely this week.

Beautiful morning all across the state! The sun is brightening things up beautifully. A gorgeous blue sky will be with us all morning long but it is chilly. Temperatures are in the upper 40s and low 50s so you many want a sweater until we get back to the 60s at 10 a.m.

Isolated showers are possible this evening. Shown below is the high resolution model, so we likely won't get quite as much rain as pictured but about a hundredth of an inch of rain is possible. Not worth canceling plans over.

Curfew in Carmel to start at 9 p.m. Tuesday and end at 5 a.m. Wednesday

Curfew in Carmel to start at 9 p.m. Tuesday and end at 5 a.m. Wednesday