Central Indiana has turned dry over the last three weeks. From July 22 through August 10 only 0.81″ of precipitation has fallen in Indianapolis.  When looking back at the same time frame this is the least amount of rain in 8 years.  It also ranks in the top 18% driest years for the date since 1871. 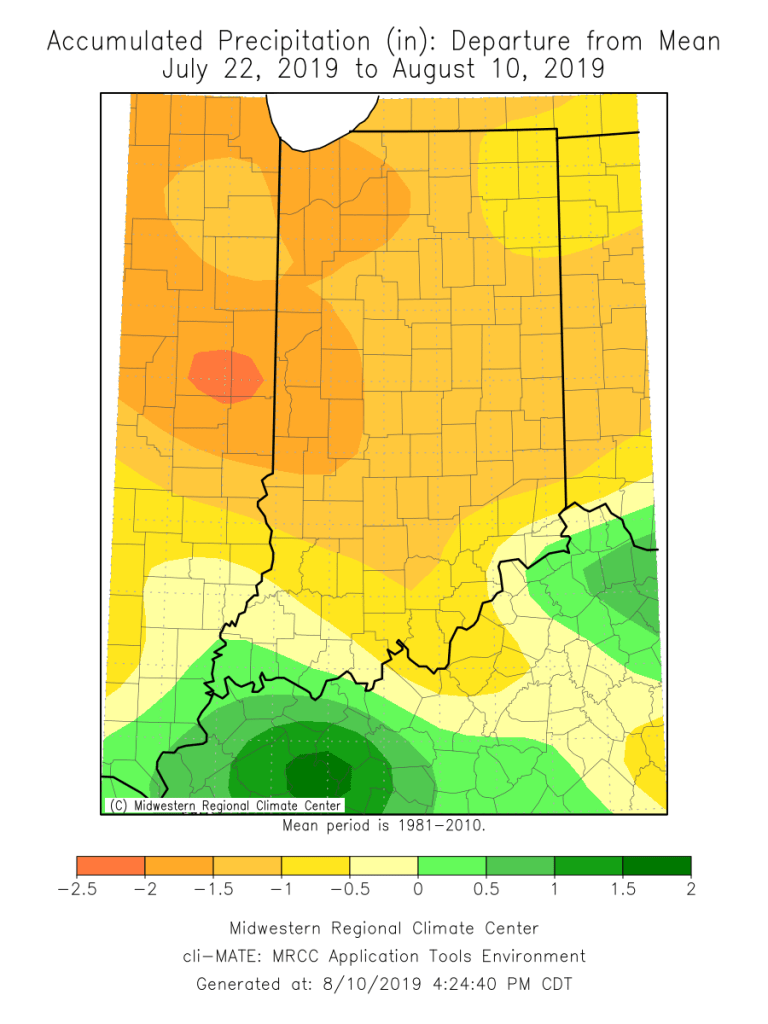 It has gotten so dry that the United States Drought Monitor has included portions of central Indiana in “Abnormally Dry” conditions in the latest Drought Monitor assessment released last Thursday. 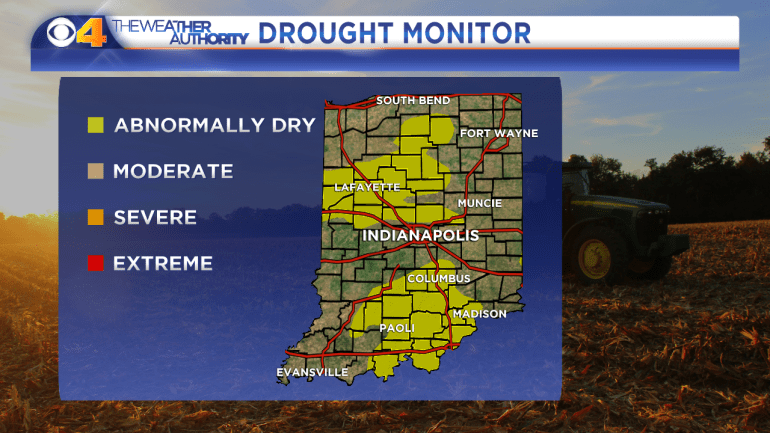 RAIN RETURNS TO THE HOOSIER STATE

We do see rain returning to central Indiana in the not so distant future.  Medium-range computer models are suggesting a thunderstorm complex will develop in eastern Iowa and northern Illinois late Monday night.

The complex is projected to dive east/southeast during the early morning hours Tuesday.  This brings with it the chance for rain, but also a chance for strong winds.  One of our high-resolution computer models suggests there could be the potential for power outages in the northern half of the state by sunrise Tuesday.

There will be a lull in the action from Tuesday morning until early Tuesday afternoon.  It looks like another round of thunderstorms will begin to develop over southern/south-central Indiana mid-afternoon Tuesday.  The storms are expected to slide off to the south/southeast through the early evening.

Latest data from the Storm Prediction Center suggests that the highest probability of severe storms would occur after 2pm Tuesday afternoon, south and southeast of Indianapolis.  Stay tuned!

July is off to a hot start. For the first ten days of the month, temperatures have been six degrees above average., including a seven-day streak of 90-degree days. A cold front brought a few isolated showers Friday and drier air behind the front will move in and give us a short break from our intense summer heat.

For this weekend we'll see less humid conditions and slight cooler temperatures. We'll have highs in the mid-80s this weekend with dry weather on Saturday and a chance for isolated thunderstorms Sunday afternoon.

A couple of storms rolling through central Indiana this morning. Scattered storms stay in the forecast this morning with a much lower chance after lunchtime. A brief downpour is possible, but we aren't expecting any widespread or long-lived rain with this.

Temperatures are warm and in the 70s this morning. Highs will be a little lower than we've been dealing with recently. We'll top off in the mid-upper 80s rather than the 90s. Lovely Friday evening ahead with 70s after sunset and for most of the night.

July is off to a hot start. For the first nine days of the month, temperatures have been six degrees above average. Our streak of 90-degree days has now reached seven consecutive days. We could use a break from the heat and one is on the way.

A weak cold front will move this way and bring a brief break from the intense heat. Ahead of the cold front we'll see widespread scattered thunderstorms through the day on Friday. Rainfall amounts will vary and up to a half-inch of rain is likely.