INDIANAPOLIS, Ind.– There is a lot of talk about a winter storm coming to central Indiana for the upcoming weekend. As we are getting closer to the weekend confidence is growing that a winter storm will have an impact on the Hoosier state.

I want to cut through all the hype on the internet/social media and tell you what is actually known about the storm at this time.

We started tracking upper-level energy as it moved off the eastern coast of Russia over the weekend. Computer models suggest this piece of energy will produce a storm that will move up through the Ohio River Valley this weekend. It continues to move across the Pacific Ocean. As of Tuesday afternoon it is located approximately 2,000 miles southwest of Kodiak, Alaska. 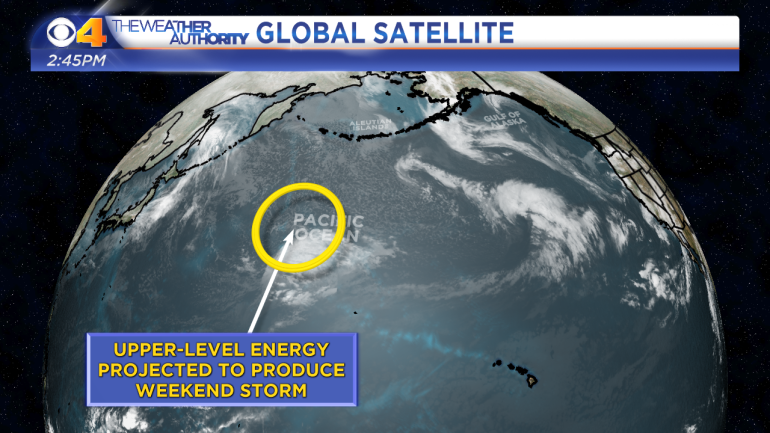 The upper-level energy has a long way to go before reaching Indiana. In fact, if you track the path the air particles will travel via the mid/upper level atmospheric winds it has to travel approximately 5,750 miles to get to the Hoosier state.

You will notice in the track how it takes more of a southern route to the Ohio River Valley. It is projected to make landfall over the Baja California in Mexico, then turning east/northeast passing over the mountains in New Mexico. Once the upper-level energy “makes landfall,” and array of sensors will be able to better sample the energy. This is important because the data is then ingested in to the computer models, allowing for much better forecast resolution.

The next key phase to the forecast process will be after the storm passes over the mountains. Why? It is not uncommon for computer models to project a storm to do one thing prior to going through the mountains and that projection never come to fruition. The mountains can often impact the upper-level energy. That is why it is so important for us to see the first round of computer models after the storm has come out of the mountains. It is at that point we are able to sample what is coming our way. Currently, it appears the upper-level energy will pass through the mountains late Thursday night/early Friday morning.

We are fairly confident in the “when” at this point. Computer models are in decent agreement that the storm will begin to impact central Indiana early Saturday morning and continue through early Sunday morning. The only asterisk to the timing is whether or not the storm happens. Again, confidence is growing, but the storm hasn’t made it to shore yet.

We look at a vast suite of computer model data and they are all in agreement that central Indiana could have a wide range of precipitation type. Snow, sleet, rain, and freezing rain (ice).

That is where the agreements in computer models end. What locations see what kind of precipitation is unknown at this time. The further north you are, the higher probability of all snow. The further south you are, the higher probability of rain and/or freezing rain. As is often the case with a complex winter storm in the Ohio River Valley the track will mean everything. A slight difference between computer models and what the track the storm actually takes could bring huge changes to what type of precipitation you receive.

Above is just one of several computer model projections for Saturday afternoon. You can see how it brings rain to the southern half of the state, snow to the northern half, and the possibility of a mix in between. What it does not show is the possibility of freezing rain (ice accumulating) where temperatures at the surface will be cold enough to freeze rain on contact. To make that determination we need to have a better grasp to what temperatures in the atmospheric column will be like as the precipitation comes in to the area. Computer models should get a better grasp on this as we get closer to the weekend.

There also remains great uncertainty as to how much liquid will be available for the storm to work with. In fact, early computer model projections are bullish with the amount of liquid available. However, at this distance, it is too early to know with confidence as many things need to be determined. For instance, could thunderstorms develop south of the region, robbing moisture from northern areas? Can the storm tap in to a moisture conveyor belt from the Gulf of Mexico in lower levels of the atmosphere.

Colder with gusty winds and snow this weekend

Central Indiana went from sunshine Friday morning to gusty winds, colder temperatures and snow showers Friday afternoon. A powerful area of low pressure will continue to dominate weather across the Ohio Valley this weekend. We'll have gusty winds and snow showers with up to a half-inch accumulation overnight. As the strong winds blow the snow around visibility will be near zero at times.

Snow showers are also in the forecast through Saturday with up an inch of snow possible Saturday afternoon. Light light snow will continue for the second half of the weekend and may accumulate up to one inch Sunday afternoon.

Wintry weather has caused slick roads all over the Plains and Midwest. That system is now pushing a wintry mix through central Indiana. Mostly we've only had light rain but a few snowflakes have made it to the ground and much more is on the way.

Temperatures will stay in the 30s all day and snow could begin accumulating late in the afternoon. More slick conditions with accumulations will come Saturday and Sunday.

Rain changes to snow overnight; more snow for the weekend

Light rain has moved into the western half of the state and will change to flurries and light snow showers after 2am.

Unity has long been a theme, and anxiety, for new presidents

Guns drawn inside US Capitol building