Those wanting more typical winter temperatures, you are getting your wish over the next couple of days.  The coldest air since March 2019 is expected to settle in Sunday.

Temperatures are expected to drop down to the single digits to near teens early Sunday morning.  A couple things are keeping temperatures from plummeting further.  We’ll keep clouds around through the overnight and gusty winds will help mix the air.

Speaking of gusty winds, wind will gust 30 to near 40 mph late Saturday night through early Sunday morning.  That will take the wind chill below zero overnight and again Sunday morning.

Computer models suggest a low layer of clouds will hover over central Indiana Sunday, keeping temperatures from warming much during the afternoon.

Temperatures are going to struggle to climb out of the teens.  If Indianapolis only makes it to 19°, this will be the coldest high temperature since March 5, 2019.  This will also put an end to our streak of above normal days (temperature) of 30 days.

The wind isn’t going to help.  While winds will not be as strong as Saturday night/Sunday morning, winds are expected to gust 23-27 mph throughout the day.  Sustained winds will be 12-22 mph.  That will keep wind chill values in the single digits at best.

Another wet day for central Indiana with several locations nearing, and crossing, the 1 inch mark.  For Indianapolis, this is the third wettest January 18 since 1872.

This is now the third day this January that has produced at least 1″ of precipitation in Indianapolis.  That is pretty remarkable considering the state capital averages less than one day with 1″ of precipitation since 1970.  Only two Januaries have had more days.  2005 and 2013 each had 4 days producing 1″ or greater precipitation.

BREAK FROM ABOVE NORMAL TEMPERATURES

Temperatures will stay below normal through Tuesday.  Then we move back above normal for a few days before a potential system brings rain, snow and cooler temperatures for next weekend. 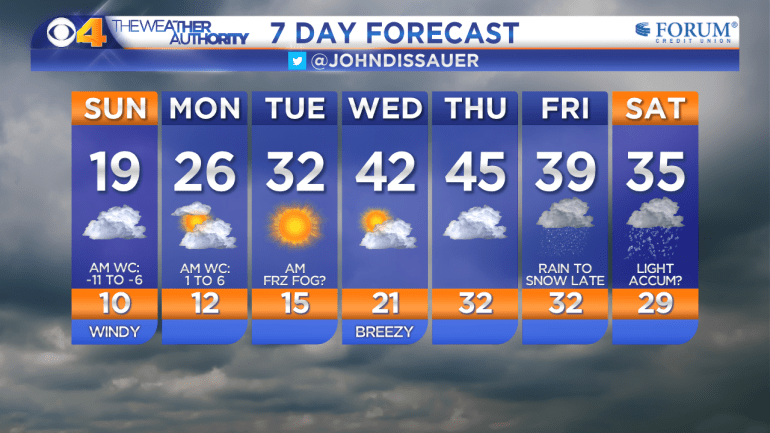 Richmond police officer ‘fighting for her life’ after …