Another cold night coming for central Indiana as temperature dip in to the single digits and wind chill values go below zero.

Even with partly cloudy skies at times, temperatures should drop pretty quickly tonight.

While it will be cold, it should get as cold as it was early Monday morning where temperatures fell to near 0°.

Winds will remain up - sustained 7 to 14 mph - through Tuesday morning.  This should allow wind chill values to drop as low as -15° to -5° by sunrise, so you and the kids will want to bundle  up if you plan on going outside.

The "feels like" temperature (wind chill) will struggle to reach double digits - above zero - Tuesday afternoon.

A weak cold front will pass through the area during the early afternoon.  It is possible a few snow showers may develop just ahead of the cold front, especially in eastern portions of central Indiana.  I am not expecting any accumulation from snow that falls.

You may notice the winds shifting a little more to the northwest after the front passes.  This will bring a reinforcing shot of cold air to the area, so don't be surprised if temperatures drop a couple degrees by late afternoon. 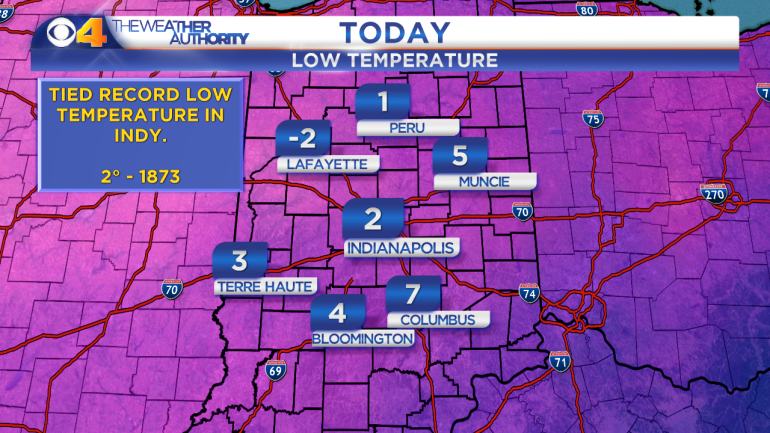 This was the coldest temperature Indianapolis has reached since January 31, 2019.

We are 1/3 of the way through a substantial cold spell.  Temperatures won't make it above freezing until Thursday afternoon.  In fact, this could be the coldest March 4-6 since 1960 if our forecast verifies.  Our forecast average temperature today through Wednesday is 13.3°.  Assuming this works out it would also rank the 2nd coldest March 4-6 as noted by the dates below.

NEXT CHANCE FOR MEASURABLE SNOW

Our next chance for measurable snow looks to come Thursday as a quick moving system passes over the southern 2/3 of the state.  At this time there remains considerable uncertainty as to how much will fall but know we've got a chance for snow, especially over south-central Indiana.

Long range computer models continue to suggest warmer temperatures returning to central Indiana this weekend.  While temperatures will be warmer - in the 50°s - how much you will be able to get outside and enjoy the 50°s is up for debate.

Data suggests warmer air surging in to the state late Saturday in to early Sunday before falling off as a cold front passes Sunday.  At this distance it appears temperatures will fall back in to the 40°s Sunday afternoon.  Stay tuned! 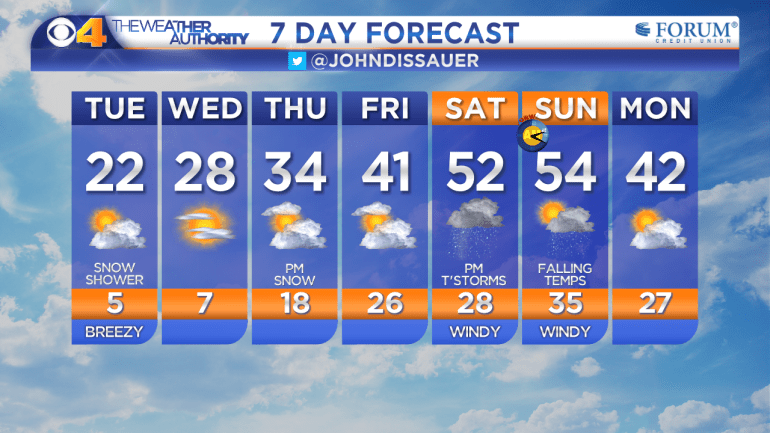 A Winter Weather Advisory today includes everyone in our area through the afternoon. That means it is a great day to work from home. Kids that are going to in person school will likely have a tough time on the way home. If you must go out, you'll want a coat, boots, and umbrella.

The wintry mix is now sliding into Bloomington and Columbus. Indianapolis will be getting this through mid-morning. Sheridan and north: this will mainly be an afternoon event for you.

There is a Winter Weather Advisory for freezing rain in effect for the northern two thirds of Indiana from 5 AM to 1 PM Monday. Our problem will be that rain is moving in and temperatures will be below freezing in the morning. FutureView shows the pink area, which is the freezing rain, in Southern Indiana before 8 AM. Likely in the Indy area by 10 AM. Travel Monday morning…

It was nice to see the sunshine Saturday. However, if you spent any time outside, you know it did not feel as warm as it looked. In Indy it was the coldest morning of the year so far. Only 12. The sunshine at least got us above freezing Saturday afternoon. Mostly clear skies Saturday evening let the temperature drop quickly into the upper 20s. And Sunday morning the road surface…

2 arrested in connection to December homicide

In-person or hybrid learning begins for all IPS students Monday

Investigation underway after man died hours after getting COVID-19 vaccine

While You Were Sleeping: Coronavirus updates for January 25

Person killed in shooting on Indy’s far east side

Neighbors react to largest ‘mass murder’ in over a decade

Neighbors react to largest ‘mass murder’ in over a decade

2 wanted for questioning in connection with Nov. 2020 deadly shooting

2 arrested in connection to December homicide

In-person or hybrid learning begins for all IPS students Monday

Investigation underway after man died hours after getting COVID-19 vaccine