Temperatures will drop through the 30°s Saturday evening before eventually bottoming out in the middle 20°s Sunday morning.

High-resolution computer models suggest there could be a few hours with reduced visibility due to fog Sunday morning.  While widespread patchy fog is not possible, some areas of patchy fog will be possible, especially in the western third of the state.

With temperatures below freezing, any pockets of dense fog would freeze on contact of exposed surfaces, making it freezing fog.  Those that plan to drive early Sunday morning should keep an eye out for areas where there is fog as it could create slick spots.

Clouds are expected to increase throughout the day Sunday.  This will keep temperatures in the lower to middle 40°s in central Indiana.

Overnight Sunday in to Monday morning a weak weather system will slide through the state.  While the air is expected to be mainly dry, there are signs that a few drops of precipitation may get squeezed out of the atmosphere.  Depending on the timing over the precipitation moving through, this could bring a few snowflakes, a brief winter mix, or just a couple of rain drops.  At this time, I am not ruling out a few snowflakes flying early Monday morning.

We’ve got a brief warm-up coming by mid-week with temperatures climbing in to the middle 50°s to near 60°.  A cold front if projected to move through the state Thursday afternoon/evening.  Winds will shift behind the front and temperatures are expected to quickly drop.  It does look like there will be enough moisture around behind the front, so rain showers could change over to snow showers late Thursday night and early Friday morning.  This does not look to be an accumulating snow maker at this time.  Stay tuned! 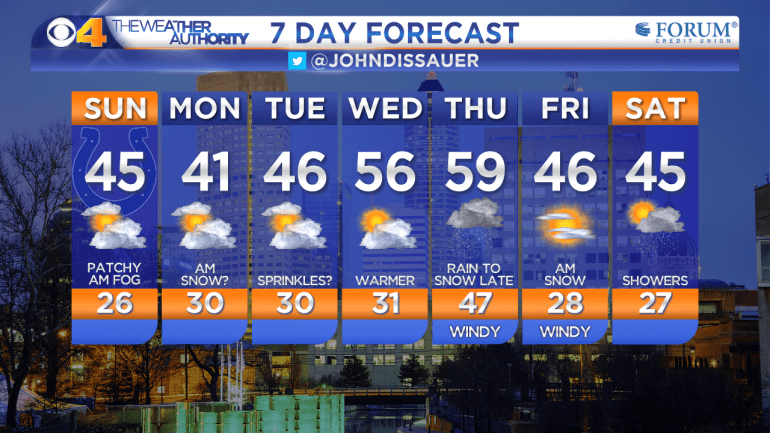 A Severe Thunderstorm Watch is in effect across Central Indiana until 8pm Saturday. There will likely be another watch issued at that expiration because the main window for damaging storms is 8pm-midnight and potentially even after midnight. The Weather Authority will be tracking the storms closely all night.

We have already had multiple hail reports across Central Indiana as well as tree damage reported in Southern Indiana.

INDIANAPOLIS: We are tracking severe weather threats moving across Central Indiana. Find the latest information as it becomes available here:

A storm system is approaching the state and will bring more rain and thunderstorms. Our first wave will move in overnight through early Saturday morning. We'll have a chance for strong to severe storms Saturday afternoon into the evening. Large hail and 50-60 mph wind gusts will be likely. Parts of the state are under a Flash Flood Watch and that watch may be extended farther south to include central Indiana this weekend as 1-2" is forecast through Sunday morning.

Highs will be in the 70s Saturday before the cold front moves across the state and brings an end to the rain on Sunday. Temperatures will fall during the day and the second-half of the weekend will be much cooler.

UPDATES: Latest developments on coronavirus from Indiana and around the country