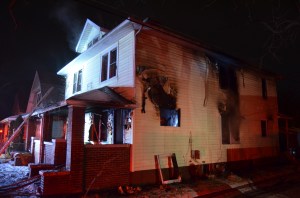 INDIANAPOLIS, Ind. (Jan. 11, 2015) — Indianapolis firefighters battled two suspicious house fires in the same location on the southeast side in as many days. On Saturday night, they asked neighbors for help.

Firefighters came out to a vacant home in the 1700 block of Cottage Avenue at Asbury Street., just before 9:30 p.m. Saturday. It’s the same corner where another home burned just the night  before. One firefighter was injured in that first fire, their efforts hampered by dangerous weather conditions. And Saturday night, efforts were complicated again — this time not just by weather conditions, but also a motorist.

Firefighters told an oncoming driver to turn around and go a different way, the the motorist refused, and drove over a supply line, breaking it. That left attack crews inside the home without water.  The second supply line, standard on all IFD working fires, was in process of being hooked up and had not yet been charged.  Firefighters inside were told to hold off their advance until the second supply line was charged. Within minutes water was re-established, but heavy fire continued to threaten their position and their hose line.

Thankfully, no one was injured.

The Indianapolis Fire Department would like to remind drivers that driving over a fire hose a life-threatening safety issue for firefighters. Please be considerate and re-route your travel pattern.

IFD is also asking anyone who may have seen unusual activity in or near the area to call 1-800-262-TIPS (8477) or Text Info to INDYCS at 274627.  Information may be given anonymously.  They also add that area residents should be vigilant about the activity in their area and be watchful for squatters that may be entering the boarded up vacant structures unlawfully.

Mayor Joe Hogsett says Marion County is twice as populous as Indiana's next most populous county, which is why restrictions are tighter than the rest of the state as Indiana moves into Stage 5.

CARMEL, Ind.-- In college, there was the “Freshman 15” but nowadays we’re hearing more and more about the dreaded “Quarantine 15.” And when it comes to fitness, there are plenty of options out there but do they fit your schedule?

Originally co-founded in 2014 by Olympic decathlon gold and silver medalist, Bryan Clay, Eat The Frog Fitness is a high-tech, personalized group fitness studio that sets itself apart by offering classes 24-hours a day.

INDIANAPOLIS – Indianapolis Public School students are just a few weeks away from heading back to the classroom in-person. But tonight, officials will hold a district-wide “Special Parent Institute” meeting to go over the new rules and restrictions in place for this school year. It begins at 6 p.m. and will be held virtually. Some of the district’s COVID-19 precautions include: All students, teachers and staff will have to wear…

No spectators this year for annual Circle of Lights event

Trump claims he paid ‘millions’ in taxes despite returns showing he paid $750 in 2016, no taxes some years

With little movement on new stimulus checks in US, here’s what other countries have done

Here’s where you can vote early across central Indiana