One of Indiana’s 2020 recruits won’t travel far to play for the Hoosiers next season.

Leal, who averaged 20 points per game as a junior last season, is a straight “A” student. His academic performance attracted offers from schools, like Stanford. But, Leal decided to play at IU, where his parents work for the school’s foundation. Leal says he expects to cross paths with them on campus.

“I wouldn’t be surprised if we do,” Leal said. “They’re going to let me live the college life.”

Playing for IU head coach Archie Miller was a selling point for Leal as well.

“I think he really knows what he’s doing,” Leal said of Miller. “I’m really buying into what he and his staff are trying to do.”

“(He’s) well-rounded in a lot of different areas,” Holmes said of Leal. “Physically, his growth has been good. Maturing, we still got a ways to go. He’s not at the top yet. But, we’re working on that.” 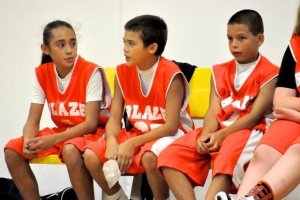 Anthony is the second Leal to be considered a basketball star at Bloomington South. His sister, Lauren, is a sophomore playing for DePauw University in Greencastle, Indiana.

They even played on the same AAU team growing up. Anthony says he could not get past his big sister on the court until he began maturing in middle school.

“She always had the edge on me,” Anthony said. “She was always tougher than me.”

How did Anthony overcome those battles with Lauren?

Anthony says Lauren motivates him to play his best because at the moment, Lauren can’t. She had surgery Monday to repair a torn meniscus. Lauren has previously torn and rehabbed both ACLs as well. Anthony says her playing career could be over.

“Just seeing her passion being taken away from her has increased my love for the game and appreciation for it,” Anthony said. “I wear her number because she wore three. She’s everything. She’s my best friend.”

Anthony aims to carry that motivation over to succeeding in a competitive Big Ten Conference. When Coach Holmes has challenged Anthony’s mindset in the past, he’s always had an answer.

“‘Anthony, who could you guard?’ Those are men out there…They’re so physical… And he said, ‘I can guard any of them.’”

INDIANAPOLIS – Three words sum up Kyle Pitts solving one of the Indianapolis Colts’ pressing needs: Not a chance.

While so much attention – and rightly so – has been focused on the importance of the Colts addressing serious needs at left tackle and edge pass rusher in the April 30-May 1 NFL Draft, we can’t ignore the fact they need to find a hybrid tight end between now and the September season opener.

BIRMINGHAM, Ala. (AP) — Fernando Alonso is winless so far this season in Formula One. Same with Carlos Sainz.

Over in IndyCar, though, Alex Palou scored a victory for Spain.

Bogdan Bogdanovic and Kevin Huerter each chipped in 23 points and Young had 11 assists for the Hawks, who have won eight of 10 and are 17-6 under interim coach Nate McMillan. Atlanta has won nine of 11 at home.

While You Were Sleeping: Coronavirus updates for April 20

Jaswinder Singh: remembering one of the eight victims killed in the FedEx shooting

All US adults are now eligible for COVID vaccine

2-year-old dead after being struck by truck in Greenwood