Indiana State Police located a red truck seen just after the fatal crash. They have ruled that particular truck out as the hit-and-run vehicle in the case.

INDIANAPOLIS, Ind. – Police are still searching for the driver who hit and killed a 53-year-old crane operator who was pulled over on the shoulder of I-465 to fix a mechanical issue.

“I saw a truck swerve over then swerve back and by the time he swerved back the guy was flipping in the air and was on the ground,” said eyewitness Emily Pavey.

The tragedy is something that Pavey said she will never forget. She was driving home around 8:15 a.m. Tuesday morning when she witnesses a dark red Ford F-150 truck off of the road and hit and kill 53-year-old Jeffery Smith. Smith was parked on the side of the road and was standing on a ladder on the side of his truck which was pulled over on the shoulder with mechanical issues.

“He was in the air and the truck was swerving back onto the road,” said Pavey.

Police say Smith’s truck was seven feet away from the lane of traffic, the crane was far over into the grass, and the trucks flashers were on.

“It was completely silent actually, there was no screaming, no tire sounds nothing,” said Pavey.

There were no sounds because the driver did not stop, even with extensive front end damage. Witnesses say traveling more than 85 mph eastbound on I-465. 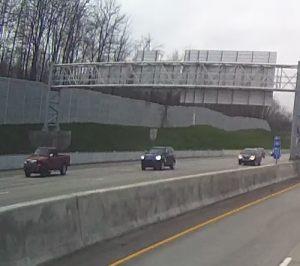 “I did not know if I should follow the guy or not and he was in the right lane and I needed to stop and get out before anybody else hit him,” said Pavey.

State police have released a photo from a trooper’s dash cam that they believe shows the suspect’s red truck.

Jeffrey Smith, a beloved husband, dad of two girls, and a grandfather lived in Rushville. He worked at R.H. Marlin Inc. on the south side for more than 20 years. The company says Smith was a talented and skilled crane operator. Witnesses say he was with his co-workers when he was hit and killed.

“The guy that he was riding with you could tell that they had a really good connection, that they have been friends for a long time,” said Pavey.

Now, his family is waiting for police to bring justice to the 53-year-old man, who will not be coming home tonight after work.

“How could you not stop?” asked Pavey.

As the Smith family asks for prayers, police are asking for the public’s help in locating the driver of the Ford F-150. If you have information call ISP or Crime Stoppers at (317) 262-TIPS.

Saturday was the wettest day of the year and the rain continued through Sunday. Scattered showers will continue overnight and a few sprinkles are likely through Monday morning. Although this has been a wet wet month several cities across central Indiana have an April precipitation deficit.

After a few clouds to start the day skies will clear Monday and it will be a warmer day with highs in the mid 60s. Another storm system will slide south of Indiana and bring in some cooler air. Later this week we will be cold enough for scattered light frost on Wednesday morning and on Thursday morning.

According to the Indianapolis Metropolitan Police Department, the accident occurred around 9 p.m. at the intersection of S. Meridian Street and South Street, not far from the Slippery Noodle Inn.

WASHINGTON (AP) — For more than a half-century, the voice emerging from the U.S. Chamber of Commerce’s monolithic, Beaux Arts-styled building near the White House was predictable: It was the embodiment of American business and, more specifically, a shared set of interests with the Republican Party.

The party's bond with corporate America, however, is fraying.

Biden sees electric vehicle battery deal as `win’ for US

Woman arrested after refusing to return $1.2 million accidentally put into her account

How to replace your COVID-19 vaccine card if lost

What makes someone so gifted? Scientists look at DNA, unlock the talent gene