WESTFIELD, Ind. – There was an uptick in deadly crashes in Westfield in 2018 and the city wants to know why. In a new campaign, Mayor Andy Cook and the police department are working together to make roads safer.

Overall crime in Westfield went down last year but the number of car crashes went up.

Captain Charles Hollowell with the Westfield Police Department says he often sees people driving while distracted. He believes a majority of crashes in the city are because of people not keeping their eyes on the road. 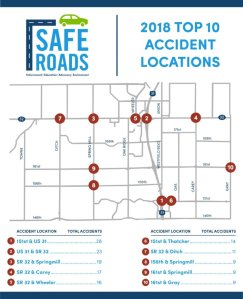 "Our job at the City of Westfield is to make sure all of our visitors and all of our residents have a safe environment," he said.

That is why the department is working with the mayor's office on a new SafeRoads campaign. They are looking at data to figure out why accidents are happening.

"A lot of attention is being given across the country across the state and we are going to do it right here in the city of Westfield," Mayor Andy Cook said.

This mission is personal to Mayor Cook. His 14-year-old grandson died last summer when he says a distracted driver hit the car the teen was riding in.

"I don’t want any parent or grandparent to ever have to go through this," he said.

They've identified 10 intersections in the city that are hot spots for accidents. Mayor Cook, who is running for re-election this year, wants to improve signage and roadway markings. He's also already met with several utility companies to talk about moving poles close to the street.

He says people are getting hurt or even killed after driving off the roadway and hitting a utility pole.

"This state is plagued with this phenomenon of placing these huge immovable utility polices just several feet off of our pavement," he said.

Five of the top 10 accident locations in Westfield are along SR 32. INDOT says they are always looking to work with public safety officials to make thoroughfares safer.

(CNN) -- It started with a routine police call reporting someone used a counterfeit bill at a store in Minneapolis.

What followed was a series of events that ended with George Floyd, 46, dead after a white police officer used his knee to pin him down in an incident captured on video. Floyd, who is black, died Monday night after he was arrested for the alleged forgery.

Costco announced Thursday that it will bring back free samples beginning in mid-June.

During a company earnings call on Thursday, Costco revealed that a modified sample program will be returning for members.

A white Minneapolis police officer who knelt on George Floyd's neck opened fire on two people during his 19-year career and had nearly 20 complaints and two letters of reprimand filed against him.

Derek Chauvin, 44, became the focus of street protests and a federal investigation after he was seen in cellphone video kneeling on the neck of Floyd, a 46-year-old a black man, for almost eight minutes Monday night during his arrest on a suspicion of passing a counterfeit bill. Floyd, who was handcuffed and heard saying he couldn’t breathe, was pronounced dead later that night.

All Noblesville police officers to wear bodycams by end of summer