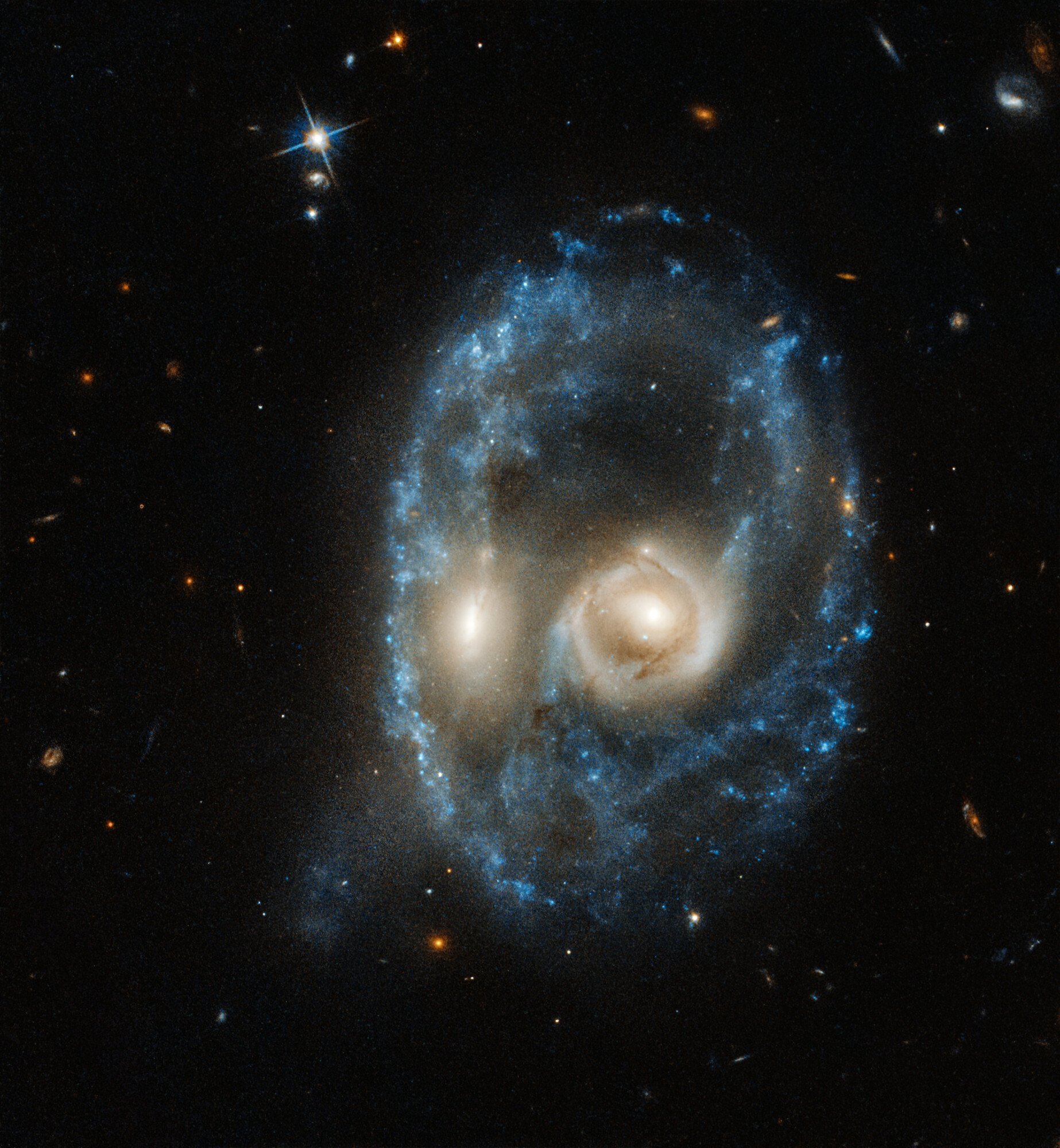 Although it looks a bit like an eerie, floating face suspended in space, the optical illusion spotted by the Hubble Space Telescope is really the result of two galaxies colliding.

Hubble took the image in June as part of its snapshot program, using gaps in its observation schedule to take photos of other intriguing targets.

The two glowing eyes of the face each represent the center of a galaxy. Young blue stars help make up the outline of the face, while other groupings of new stars seem to sketch out a mouth and nose.

Galaxies aren’t the kindest of neighbors. They can crash into each other — or one can cannibalize parts of another that comes too close.

But this system was formed by a relatively rare, head-on collision. That means the ring we see that makes up the face is ephemeral, only lasting about 100 million years — a short time on the universal time scale. The ring formed when each galaxy’s disk, which is filled with gas, dust and stars, was pulled and stretched out by the collision.

This is the Arp-Madore 2026-424 system 704 million light-years from Earth, as noted in the “Catalogue of Southern Peculiar Galaxies and Associations.” The Arp-Madore catalog is the result of work published by astronomers Halton Arp and Barry Madore, who both searched for unique galactic interactions. Their combined work detailing thousands of galaxies was released in 1987.

Rings are rare because there are only a few hundred of them known in our corner of the universe. The circumstances that create them have to happen in a certain way for the ring to form.

And because the galactic centers of each one seen in the image appear to be the same size, that means the galaxies were equal in proportion before they collided. Usually, larger galaxies cannibalize smaller galaxies.

Hubble’s growing collection of images, those of including unusually interacting galaxies, can provide astronomers with information about how galaxies evolve. Hubble’s observations can also help determine targets for future space telescopes, like the James Webb Space Telescope launching in 2021.

A beloved grandmother who spent all her life taking care of her family is proving to the world that you're never too old to make your dreams come true.

Dorothy Pollack, who turned 103-years-old in June, is spending her days going through her bucket list. Her first adventure? A frog tattoo in honor of the one thing she loves more than beer and burgers.

MOTZA, Israel (AP) — An Israeli jewelry company is working on what it says will be the world's most expensive coronavirus mask, a gold, diamond-encrusted face covering with a price tag of $1.5 million.

The 18-karat white gold mask will be decorated with 3,600 white and black diamonds and fitted with top-rated N99 filters at the request of the buyer, said designer Isaac Levy.

MALIBU, Calif. (AP) — Simon Cowell broke his back Saturday while testing his new electric bicycle at his home in California.

Cowell was expected to have surgery Saturday evening, according to a spokesperson for the entertainment mogul. Cowell fell off the bike while in the courtyard with his family at his house in Malibu. He was taken to a hospital and was said to be under observation and doing fine.

Man, woman shot to death on Indy’s near west side

Man dies in shooting on east side