INDIANAPOLIS, Ind. — A truck scraped the bottom of an overpass on the northeast side Thursday morning, slowing traffic in the area.

According to Indiana State Police and INDOT, a flatbed truck carrying an excavator hit the bridge overpass. Inspectors saw damage to the bridge beam but said it was not a safety concern. Repairs will be made in the near future, INDOT said.

State police said the excavator was damaged so badly that it needed to be cut into pieces so it could be moved. The scene was cleared by around 11:20 a.m. 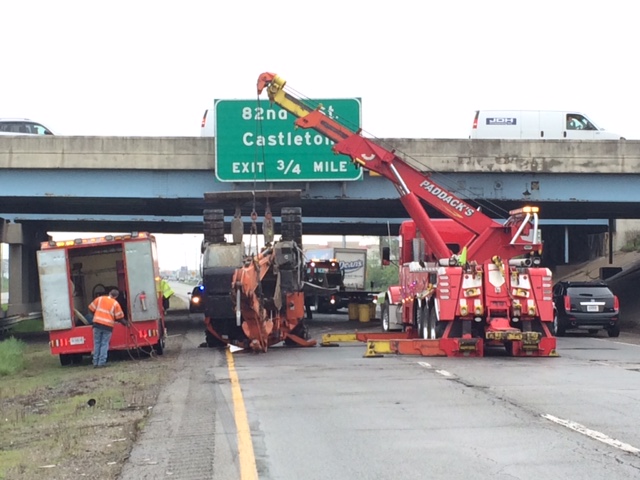 I-69 NB / I-465 SB traffic affected. @INDOT on the way to inspect the bridge & @ISPCVED inspecting the semi. pic.twitter.com/Ug8SnxQWiS

#Update – The excavator was damaged so badly it had to be cut apart to move safely, 60-90 min until cleanup complete pic.twitter.com/oTljg7rUlH

INDIANAPOLIS, Ind. -- An Irvington man is searching for a lost family heirloom, and he needs your help to bring it home.

“I really want it back because I want to be able to pass it on to my kids and their eventual grand kids," explains Mercer Suppiger.

INDIANAPOLIS — Ten years ago on January 26, 2011 a beloved IMPD Officer David S. Moore died in the hospital after being shot in the line of duty three days before. The fatal shooting happened after Officer Moore pulled over the driver of a stolen vehicle.

IMPD said that man shot Moore four times. He is now serving life in prison without the possibility of parole.

INDIANAPOLIS -- The COVID-19 pandemic has caused a backlog of court cases waiting for trial, including a homeowner's case against the city of Indianapolis.

The CBS4 Problem Solvers spoke to Anthony Dragan in 2017 after his home, in the Ivy Hills neighborhood in Castleton, flooded three years in a row. Dragan attributed the flooding to a broken culvert behind the property, which has since been repaired as part of a larger city project to fix flooding in the area.

How the CDC’s new travel restrictions impact Hoosiers and Americans

More snow for Wednesday; a cold blast to end the work week

Body image issues on the rise during pandemic