(April 14, 2015) – This picture of a little boy with his fist clenched in victory is one of the internet’s longest-lasting memes, known as “Success Kid.”

Success Kid’s real name is Sammy Griner, and his family is trying to use his internet success to help raise money for his dad’s kidney surgery and treatment and to find a live donor.

According to The Daily Dot, Justin Griner was diagnosed with kidney disease in 2006, and he experienced full kidney failure in 2009.

Laney Griner, Justin’s wife and Sammy’s mother, created a GoFundMe campaign with a goal of $75,000 to help cover medical expenses associated with a kidney transplant.

“His energy and mood are affected, he can no longer work, and he spends 12 hours a week in dialysis clinic. Having been on dialysis for this long greatly increases his risks of developing further complications. The only way to save his life is to get a transplant. There’s no other way around that.”

According to Laney, around 80% of the cost of dialysis and his transplant are covered by Medicare, but additional medicines that he has to take for the rest of his life aren’t covered.

The GoFundMe page also has information about being tested for a kidney donor match for Justin. Laney says their family and friends have been tested, but no one has been a match yet.

Laney first posted the now-famous picture of Sammy on the beach in 2007 on Flickr when he was just 11-months-old. His picture spread to Myspace and then to Reddit. The image is still commonly used on the Internet today to express satisfaction with any unexpected outcome and has even been used on billboards and TV commercials. 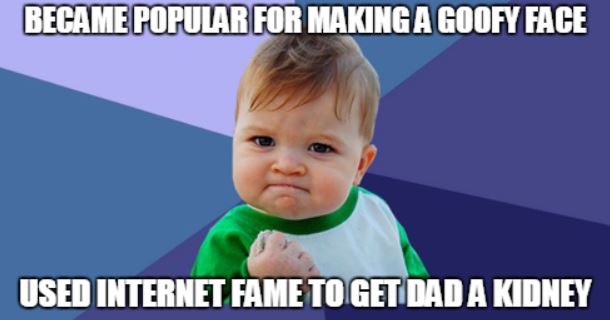 About 1 million Americans a day packed airports and planes over the weekend even as coronavirus deaths surged across the U.S. and public health experts begged people to stay home and avoid big Thanksgiving gatherings.

And the crowds are only expected to grow. Next Sunday is likely to be the busiest day of the holiday period.

INDIANAPOLIS-- A man was arrested late last week in connection with the murder of a woman in October.

The shooting happened on Oct. 11 around 10 p.m. in the 2600 block of E. Washington St. When police arrived, they found 39-year-old Sarah Blackwood with multiple gunshot wounds. She was transported to a nearby hospital, where she was pronounced deceased.

NOBLESVILLE, Ind. -- Hamilton County issued a public health order to complement Indiana’s existing orders, according to a release from the county health department.

“The Governor’s orders identify minimum levels for high exposure settings like social gatherings or events,” said Dr. Charles Harris, Health Officer for the Hamilton County Health Department. “This order establishes stricter limits for our county based on the state’s color-coding metrics for each county.”

What’s the best Christmas movie ever made? Here’s your chance to choose

Salvation Army Red Kettle donations to be matched up to $50,000 by angel donor

Colts team up to bring meals to Hoosier families this Thanksgiving

Inside the ICU: Perspective from an Indiana nurse treating COVID-19 patients