INDIANAPOLIS, Ind. – A man charged in connection with the death of a pastor’s pregnant wife in November 2015 has entered a plea deal.

Jalen Watson, 23, is one of three men charged in the fatal shooting of Amanda Blackburn during a home invasion robbery on November 10, 2015.

The court confirms Watson is pleading guilty to one count of robbery and two counts of burglary in connection with the case. Per the agreement, all other charges, including two counts of murder, will be dismissed.

Marion County Prosecutor, Terry Curry said Watson agreed to help in the prosecution against the co-defendants in the Amanda Blackburn Case.

Curry said he’s pleased with the outcome and he as well as Watson’s attorney have been working on an agreement for months. Curry said he felt the agreement was “appropriate.”

“We were confident his involvement was certainly less than the others in addition to the obvious which is obtaining his cooperation in the prosecution of Larry Taylor and Diano Gordon,” Curry said. 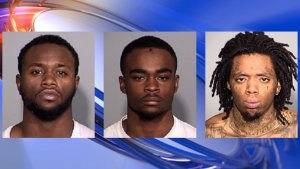 Additionally, all three men are accused of committing two other burglaries on the morning of Blackburn’s death, as well as robbing a woman at a west side apartment on November 3, 2015.

Watson has agreed to plead guilty to burglary in that case with all other charges to be dismissed.

US jobless claims drop to 385,000 as economy improves

WASHINGTON (AP) — The number of Americans applying for unemployment benefits fell last week by 14,000 to 385,000, more evidence that the economy and the job market are rebounding briskly from the coronavirus recession.

The Labor Department reported Thursday that unemployment claims — a proxy for layoffs — dropped last week from a revised 399,000 the week before. The applications have more or less fallen steadily since topping 900,000 in early January. Still, they remain high by historic levels: Before the pandemic slammed the United States in March 2020, they were coming in at around 220,000 a week.

Biden to honor officers who protected Capitol during insurrection

Under the bill, which passed by voice vote in the Senate Tuesday with no objections, there will be four medals – to be displayed at the Capitol Police headquarters, the Metropolitan Police Department, the U.S. Capitol and the Smithsonian Institution.

COVID-19 booster will likely be needed before winter, Moderna says

TAMPA, Fla. (WFLA) — Drugmaker Moderna says it has seen its COVID-19 vaccine's antibody levels decline over time and believes people who received two doses of it will need a booster shot before winter to protect against virus variants.

"We believe that increased force of infection resulting from Delta, non-pharmaceutical intervention (NPI) fatigue, and seasonal effects (moving indoors) will lead to an increase of breakthrough infections in vaccinated individuals," the company said in its second-quarter earnings presentation Thursday.

Can I get ‘long COVID’ if I’m infected after getting vaccinated?

Coronavirus: Who should get tested for current infection of the virus and when

Homeless camp at Irvington property keeps neighbors up at night

Homeless camp at Irvington property keeps neighbors up at night

Woman arrested in Carmel for rape of special needs minor

Who is protected by the latest CDC eviction moratorium?

US jobless claims drop to 385,000 as economy improves

Biden to honor officers who protected Capitol during insurrection

COVID-19 booster will likely be needed before winter, Moderna says