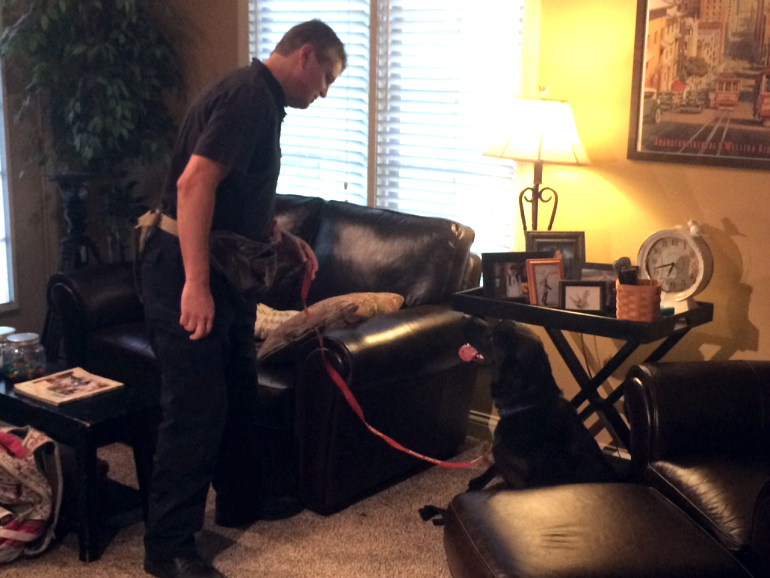 FBI sources confirm that the search is linked to an ongoing child pornography investigation.

While dozens of agents from federal, state and local departments went in and out of Fogle’s Zionsville home, there was one investigator who didn’t get much attention–a rambunctious black lab named “Bear” was on scene and played a big role during the raid.

Officers around the world have used canines to assist with bomb, drug and suspect detection for years, but Bear has a very special ability – just ask his handler.

Bear is an electronic detection K9, and he is one of only three in the entire country trained to sniff out electronics.

When he hits on a device, Bear will sit and show his handler exactly where it is. Bear receives food incentives.The only time Bear eats is while he’s working.

Bear can search a typical living room within about five minutes, and he often finds items an investigator might miss, according to Jordan. His unique skills were called upon Tuesday during the investigation at  Fogle’s home.

“Everything is still under investigation, so I’m not really allowed to talk about it,” said Jordan.

While Jordan can’t get into specifics of the Fogle case, he says dogs like Bear are a huge resource when it comes to child pornography investigations.

“You think about investigators going into a house and trying to find a micro SD card that is as big of a finger nail. It will take investigators hours, especially if someone is trying to hide it.”

During a controlled demonstration , Bear was able to find a hard drive stashed between couch cushions, an iPad in a backpack, a micro SD card tucked away in a wine rack, a flash drive in a magazine holder and other items.

Jordan is hopeful that law enforcement agencies around the country will see the value in specialized dogs like Bear. In addition to Bear, Jordan is also training another electronic detection K9. Both of the dogs are for sale.

Waldron home burns to the ground after tree falls …