INDIANAPOLIS, Ind. — Crews are working to a crash on I-65 Saturday afternoon

Crews say the Meridian Street happened just after noon Saturday and involved a Jackknifed semi and another vehicle. That caused traffic to slow down to a crawl. 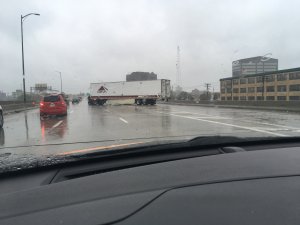 The other crash happened at the West Street off-ramp. INDOT crews say it was a minor incident that has since been cleared up.

INDOT says the Meridian Steet exit will be closed while crews clean up the scene.

The Mooresville Metropolitan Police Department said an officer patrolling the streets noticed a vehicle with only 1 tail light and a license plate that didn't match the car it was on.

The fire started on I-65 Northbound beginning near the 143 mile marker. Fire crews confirm the blaze stretched for about 6 miles. They believe sparks from the tires of a semi-trailer truck caused the fire.

(CNN) -- When voters in Fulton, Wisconsin, arrived to cast their ballots in a local election Tuesday, the voting process looked a little different.

Rather than the usual paper ballots, voters made their selections on digital tablets, loaded them onto plastic cards outfitted with memory chips, and inserted them into a card reader that saved the votes to a computer and printed a paper copy of each ballot to be placed in a ballot box.

Family gets $4,233 bill after daughter sent to hospital by school counselor