WESTFIELD, Ind. -- When you see something, say something.

That’s what neighbors did when they noticed a Great Pyrenees who appeared to be in distress during a vicious heatwave.

“Someone had complained about Bear, evidently to animal services, and they went out to check on him,” said Indy Great Pyrenees Rescue Director, Jane Rose.

These images show the conditions six-year-old Bear was left in when he was surrendered by his owner July 19. 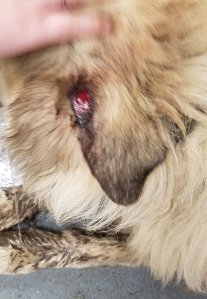 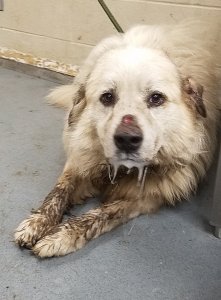 “It was over 90 degrees. And he was chained, he’s been chained his whole life. And the person decided to surrender him rather than bring him in the house,” said Rose.

Bear has wounds on his face and ears. His coat is also matted.

“His wounds are fly strikes, from where he’s been attacked by flies while he been outside. So they just kind of start biting on him and then it develops into a big sore,” said Rose.

She’s hoping he doesn’t need surgery. But she’s worried he may test positive for heartworm and Lyme disease which could cost up to a thousand dollars to treat.

In Indianapolis, your dog must be brought inside a temperature-controlled building when:

But it's something Rose says she sees too often.

“Unfortunately we are in a disposable society, and it’s also with children and pets,” said Rose.

They’re hoping Bear will be ready for his forever home in the next few weeks. In the meantime, they have a message for pet owners.

According to Animal Control, Bear’s owner will not face any charges because he surrendered the dog.

If you would like to donate, feel free to reach out to Indy Great Pyrenees Rescue or Bed and Biscuits Kennel.

The National Highway Traffic Safety Administration (NHTSA) said it was denying petitions filed by Ford and Mazda Motor Corp in 2017 seeking to avoid recalling vehicles with potentially dangerous inflators. The decision also will require Mazda to recall and repair driver air bags in approximately 5,800 vehicles. The recalls will cover various vehicles from the 2006 through 2012 model years.

DES MOINES, Iowa (AP) — Lottery players will have another shot at the third-largest jackpot in U.S. history after Tuesday night's drawing didn't turn up a winner.

The Mega Millions top prize climbed to an estimated $970 million, the biggest jackpot in more than two years. Powerball, the other lottery game offered in most of the U.S., isn’t far behind at $730 million for a drawing Wednesday night.

LOGANSPORT, Ind. -- A 76-year-old man is dead and a 72-year-old woman is in the hospital after a fire at a Logansport home Tuesday night.

At around 9:35 p.m., police and firefighters were dispatched to a home in the 400 block of W. Market Street for a report of a fire.

China and WHO criticized for initial response to pandemic

While You Were Sleeping: Coronavirus updates for January 20

Police: Person in serious condition after shooting on Indy’s east side

BACK TO THE CLASSROOM: Some school districts in Marion Co. return to in-person learning

Indianapolis man killed after being shot in south side traffic

China and WHO criticized for initial response to pandemic

While You Were Sleeping: Coronavirus updates for January 20