BEECH GROVE, Ind. – Police are warning the public about a python on the loose in Beech Grove.

The snake is a Burmese Python named Vine, and it escaped its owner’s residence. It’s said to be 14-feet long.

Police say the snake may be in the area of 400 block of Byland Drive. She escaped five days ago and police say the owner, Benny Tarplee, delayed reporting it. 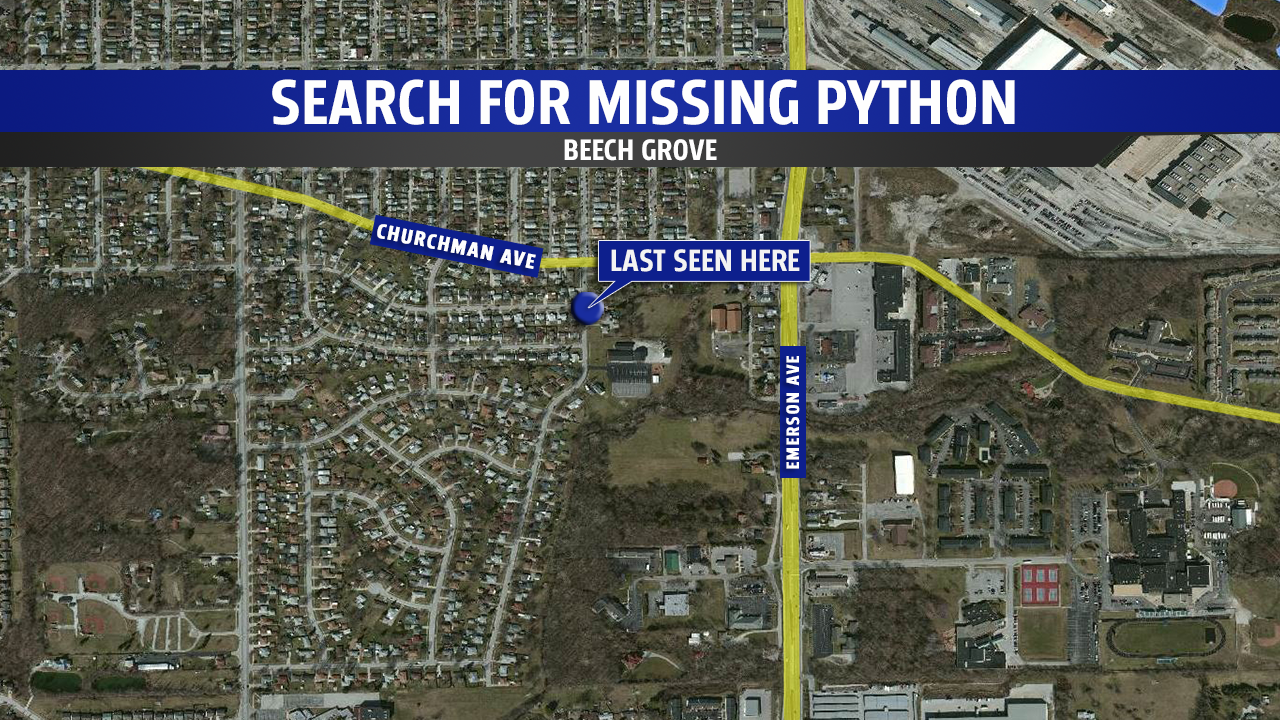 Tarplee said he’s had the python since she was about a foot long. She’s now eight years old. He believes Vine left because it was too hot in the house and someone left the door cage unlocked during cleaning day.

“She’s a sweetheart, she’s really a sweetheart, and she’s the biggest baby on the face of the Earth,” said Tarplee. “It’s a snake, she’s not the devil. She’s not here to hurt you, as a matter of fact, as long as you leave her alone, she will leave you alone.”

“Actually when our natives are injured they’re picked up by DNR and dropped off here.

“My family is not a big fan of snakes. My job isn’t exactly the most appealing to most people and I can’t really call it a job. I guess I do it voluntarily, we all run off donations and a lot of the animals cost a lot to feed and keep up.”

He stressed that as long as you don’t try to grab or touch Vine, she won’t hurt you.

“She’s not going to hurt you kids…she can’t get past your shoulders, she’s never going to attack something she can’t eat.”

He also asked people not to kill her. If she’s threatened, that’s when she may bite.

If you see the python, don’t try to capture it. Instead, contact Beech Grove police by calling 911.

WHAT UP BEECH GROVE?!

A look inside the Grammy gift bag

Want to know how to treat yourself like a celebrity? We’ve got the rundown of gifts for a Grammy-level self-pampering session.

Themed food and drinks are a surefire way to make your party stand out, and looking at past Grammy nominees is a great way to get inspiration.

Love the Grammys? We have everything you’ll need …

With Grammy night around the corner, here are some fun ways to embrace the theme, boost your entertainment and make your guests feel a part of the festivities.

Shooting investigation on Indy’s northeast side

2 found shot on northwest side of Indianapolis

Shooting investigation on Indy’s northeast side

Eagles superfan from Indy headed to the Super Bowl

Juvenile shot and killed on Indy’s east side

Muncie mom had kids in ‘filthy’ home, no running …

Pacers get past Magic for sixth straight time with …