According to his sister, he left Lafayette on March 15 and was heading to Florida to meet up with her,  but she says he never arrived.

The last contact anyone had with Kallenberger was on March 15 when a trooper was sent to I-65 SB near the 86 mile marker in Johnson County. Kallenberger’s motorcycle had broken down, and the trooper asked Kallenberger if he needed help. 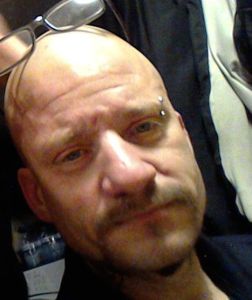 Troopers returned to the area a few hours later, and they found his motorcycle, but they did not see Kallenberger. The motorcycle was towed to a secure lot.

No one has seen or heard from Kallenberger since that day. His wife and sister reported him missing and his information was entered in the missing person’s database on March 29.

Kallenberger is a white male, five feet nine inches tall, 200 pounds with blue eyes and a shaved head. He has numerous tattoos on his arms, head, neck and piercings on his left eyebrow and left ear.

If anyone has seen Kallenberger, please contact the Indiana State Police at the Lafayette Post at 765-567-2125 and ask for Sergeant Jerry Holeman or call your local law enforcement agency with any information.

INDIANAPOLIS -- The Indianapolis Metropolitan Police Department confirmed on Saturday that two assault rifles used in Thursday's mass shooting were purchased legally by the shooter in 2020.

According to police, during the shooting at FedEx Ground-Plainfield Operation Center, suspect Brandon Hole was witnessed using two assault rifles in the shooting that left eight people dead and several others injured.

VIGO COUNTY, Ind. -- A statewide Silver Alert has been declared for a 17-year-old missing out of Terre Haute.

According to the Vigo County Sheriff’s Department, Jacob Hunter was last seen on Saturday at around 10 a.m. Police believe he is in extreme danger and may require medical assistance.

INDIANAPOLIS -- The community is coming together to show support for the victims and families affected by the shooting at the FedEx Ground facility.

The group Purpose 4 My Pain joined other organizations, along with several faith leaders with different religious backgrounds and mental health experts for a vigil at Olivet Missionary Baptist Church Saturday afternoon on the city northwest side.

Will your kids need to be vaccinated?

Survivors of the FedEx shooting retell their escapes