On Oct. 10, 2017, Tresor Shema pleaded guilty to his charge of failing to remain at the scene of an accident and obstruction of justice. His other charges were dismissed. Shema was sentenced to 5 years of jail, 1 year of home detention, 2 years of probation and 10 years of license suspension.

INDIANAPOLIS, Ind. – Indianapolis police have arrested a man in connection with a deadly hit-and-run on the west side.

Police responded the incident near 34th Street and Moller Road around midnight Sunday.

Police say the suspect, 20-year-old Tresor Shema, struck another vehicle going north on Moller, which was occupied by a male driver, 22-year-old Luis Rivera, and a 22-year-old female passenger. That car was sheared in two. 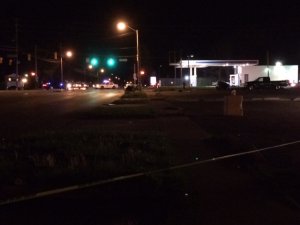 Rivera was taken to Lois Eskenazi Hospital in good condition. The female passenger died at the scene. Her name has not been released at this time.

Police say Shema fled the scene on foot following the crash, but he was quickly apprehended. He now faces a charge of failing to stop at an accident involving death, a level 5 felony.

Investigators believe alcohol may have been a contributing factor in the collision.

WESTWOOD, Mass. (AP) — High school students in a Boston suburb are making an animated film version of "Romeo & Juliet" after their plans to stage a traditional performance were scuttled this fall by the ongoing pandemic.

The cast at Westwood High School has been making voice recordings of the scenes, which will then be set to images from a graphic novel version of the timeless Shakespeare play.

LONDON (AP) — Cambridge University launched an appeal Tuesday to find two valuable notebooks written by Charles Darwin after they were reported as stolen from the university’s library.

The notebooks, estimated to be worth millions of pounds, include the 19th-century scientist’s famous “Tree of Life” sketch. They haven’t been seen since 2000, and for years staff at the library believed that the manuscripts had probably been misplaced in the vast archives.

INDIANAPOLIS (AP) — An investigation stemming from allegations of illegal political contributions by a longtime Indiana casino executive could snarl the future of multimillion-dollar projects for new casinos in Gary and Terre Haute.

The Indiana Gaming Commission has more than 10 people under investigation for possible financial misconduct that would violate state casino laws or regulations, said Sara Gonso Tait, the commission’s executive director.

Prime minister: Canadians won’t be among the first to get vaccine

‘America is back’: President-elect Biden pushes past Trump era with nominees

Are dining tents a safe way to eat out during the pandemic?

Can you repeat that? Hearing trouble becomes more obvious with masks

Can you repeat that? Hearing trouble becomes more obvious with masks