INDIANAPOLIS, Ind. – A pilot was forced to make an emergency landing Sunday afternoon at Dick’s Sporting Goods on the northwest side.

Just after 2:45 p.m., authorities were dispatched to the store on the report of an aircraft malfunction.

The pilot, identified Greg Mahler, was was forced to make an emergency landing and landed in a ditch near the parking lot and I-465. 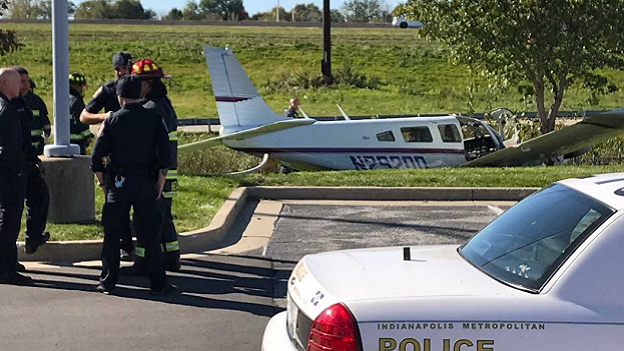 He was uninjured as a result of the crash and told us he had engine failure near Eagle Creek.

Mahler originally planned to land near Zionsville Rd. but the said there were too many cars. Then, he saw the ditch near Dick’s Sporting Goods and executed a successful emergency landing.

Mahler said he was gliding the entire way.

The FAA released the following statement after the emergency landing:

“The pilot of a Piper PA32 aircraft reported engine issues while on the way to Indianapolis Metro Airport. The plane landed in a shopping center parking lot about 4 miles west of the airport. No injuries were reported. No information on damages to vehicles on the ground. The FAA will be on the scene to begin an investigation.”

INDIANAPOLIS, Ind. -- A person shooting inside a south side gas station set the store on fire late Friday night.

Police received a call for shots fired inside the Marathon Gas Station on the 1300 block of West Southport Road shortly after 11:00 p.m.

LAWRENCE, Ind. — As college conferences continue to postpone or cancel fall sports, it’s putting high school stars at a potential disadvantage when it comes to their financial futures with scholarships.

“That question of sort of scholarship number, and a potential log jam, is a real question,” explains Purdue Athletic Director Mike Bobinski, “[It’s] one we won’t know any answers to for a while.”

INDIANAPOLIS, Ind. -- Several of the people involved in a notorious drug trafficking ring in Kokomo will spend decades in federal prison for the crimes they committed. Their arrests and prosecution are all a part of Operation Law and Order.

“Operation Law and Order” resulted in federal charges against 15 Kokomo residents in a wiretap investigation conducted in fall of 2017 through May 2018. The Kokomo Police Department reached out to the Drug Enforcement Administration to assist them with the dismantling the violent drug ring.

Crash on I-65 in Jackson County seriously injures Crothersville officer

People who recover from coronavirus are protected up to 3 months, CDC says

After 46 years, sisters separated by orphanages and foster homes reunite