WHITESTOWN, Ind. — New U.S. census data shows that a lot of people are moving into central Indiana, but some communities are also seeing their population shrink.

Indiana University’s Business Research Center took a look at the new data, released for 2015, breaking it down to show trends. 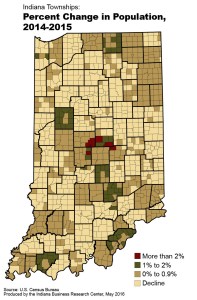 Whitestown was the fastest-growing central Indiana community for the fifth year in a row, nearly doubling its size in that time.

“It’s been insane, the development has just been incredible,” Whitestown resident Jeff Anderson said. “We were the third house that they put out here, so we saw all of the homes in this neighborhood get built.”

Town manager Dax Norton said that while growth is a great thing, too much of it too fast could cause challenges.

“How do we manage this growth, this fast, with all of the needs (and) services these residents are going to expect?” Norton said. “We’ve got to be very careful about how we strategically plan.”

Joining Whitestown on the top of the list for growth were Westfield, Bargersville, McCordsville, and Brownsburg.

Communities in outlying counties saw the most people leaving, though. Among those with decreased populations were Anderson, Muncie, Kokomo, and Richmond. Logansport saw the biggest drop in central Indiana.

IU senior demographer Matt Kinghorn pointed to donut counties as the biggest areas of growth, but said that in some suburban areas, the growth is not as great as it was before the recession.

“Hamilton county, Hendricks county, (and) Johnson County really aren’t growing as quickly as they were during the 2000’s or during the 1990’s,” Kinghorn said.

Overall, Kinghorn said the data continues to follow trends in recent years and that it can help communities figure out where to go next.

“The information is going to mean different things to different communities, just based off of … the reality on the ground in those areas,” Kinghorn said.

To see what happened in your community, go to the full list compiled by IU at the link here.

HENRY COUNTY -- The Indiana State Police is working with police from Henry County and New Castle after two inmates escaped.

INDIANAPOLIS -- Fire investigators continue searching for the person who set fire to a home on Indy's north side in November. Since the fire ignited, homeowners' cameras have captured other people trespassing and entering the home.

The arson happened early in the morning on November 7 at the house located in the 1200 block of East 91st Street. Surveillance video shows a person coming into the backyard, lighting a fire on the back deck, leaving, returning again, and relighting the fire.

INDIANAPOLIS -- Close to 800,000 people in the United States will suffer a stroke this year.

High blood pressure is a leading cause, and placque found in the arteries running up to the brain poses a dangerous risk. Removing and stabilizing the placque can save a patient's life, but old techniques are risky.