All right – I’m not really going to name the twins after the famous Teenage Mutant Ninja Turtles, but Donatello, Raphael, Michelangelo and Leonardo visited the station this week and suggested naming the twins after everyone’s favorite turtle crew! #Cowabunga 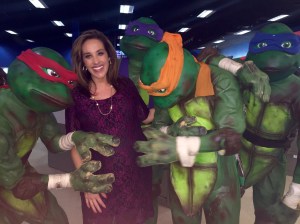 Shakespeare asked in his most famous play Romeo & Juliet – “What’s in a name?!”

I’ll admit, I’m struggling a bit trying to figure out what to name our twins. I honestly thought it would be an easier process for me. I had two girls names ready to go (even though I always knew I was pregnant with boys). I worry about naming one of them the name I’ve always loved and then the other gets the second pick (that doesn’t seem fair!). Naming a human being – TWO in my case – is TOUGH!

The final list for the most popular baby names in 2015 isn’t out quite yet, but looking at the Social Security Administration’s most recent list of baby names usually highlights what’s still on trend.

Noah is number one for boys, followed by Liam, Jacob, Mason and William.

For the ladies, Sophia is number one, with Emma, Olivia, Isabella and Ava rounding out the top 5.

Experts remind parents that children’s names are often a reflection of them more than they think.

Jennifer Moss, author of The One-In-A-Million baby name book and founder of Babynames.com, says when you decide a name, you need to see it from your child’s point of view.

If your child has an unusual name, YOU crave the spotlight – but will they?

If your child has an old-fashioned name, you’re on the conservative side. Moss says names like Agnes & Tabitha are trendy, but in a safe way.

Family names show you’re sentimental. And, if you choose a creative spelling, YOU dare to be different. Moss says this technique can backfire because your child may have to spell his or her name for people for the rest of their life.

Bottom line – there are A LOT of opinions on names. Most of my friends are advising me, if I don’t want to get feedback, don’t tell many people the final list for the twins. It’s pretty good advice!

Did YOU have trouble naming your children? How did you pick a name?

Chime in on social media using the hashtag #PencePregnancy.

I always want to hear from you, and I would love your suggestions. After all, I’m trolling the internet a lot lately and came across this Hipster Baby Name Generator. You select your baby’s likes and dislikes (what you think they will be) and it whips up a very trendy name.

Follow my journey on social media, using the hashtag #PencePregnancy

You can also follow me on my social media accounts:

Waldron home burns to the ground after tree falls …