NEW YORK (AP) — Health officials said Tuesday they have more evidence that a certain chemical compound is a culprit in a national outbreak of vaping illnesses.

Researchers analyzed black market vaping cartridges seized in Minnesota during the outbreak this year, and vaping liquid seized in that state last year. The newer cartridges contained the compound vitamin E acetate, but none of the older samples did. 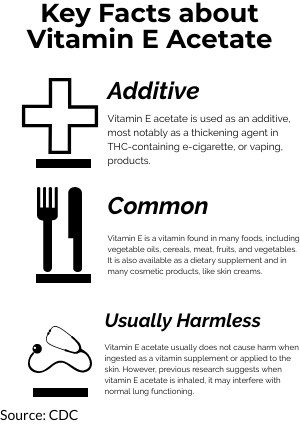 They also looked at vaping cartridges collected from a dozen patients. Vitamin E acetate was commonly found in those, too.

The study was small, but it echoes other work that found the compound in the damaged lungs of 29 patients across the country.

Nearly 2,300 Americans who vape have gotten sick since March, many of them teens and young adults, according to a recent tally by the U.S. Centers for Disease Control and Prevention. At least 47 people have died.

The CDC recommends that people should not use THC-containing e-cigarette, or vaping, products, particularly from informal sources like friends, or family, or in-person or online dealers. The organization also says while the investigation is ongoing, vitamin E acetate, or any other substance not intended by the manufacturer, should not be added to e-cigarette, or vaping, products.

Those new cases were reported to ISDH Sunday, and the new total reflects corrections to the previous day’s total.

BALTIMORE (NEXSTAR) -- One person has died and one other was trapped in the wreckage after a natural gas explosion Monday morning in Maryland, according to the Baltimore Firefighters Union IAFF Local 734.

The crash occurred at approximately 11:11 p.m. on County Road 1000E south of 56th Street near Brownsburg. A preliminary investigation shows the driver was traveling southbound on County Road 1000E when he drove off the west side of the roadway and hit a utility pole. He suffered life-threatening injuries during the crash.

While You Were Sleeping: Coronavirus updates for August 10