IMPD sent out an alert about the missing man on Saturday, and Civil Air Patrol searched for the plane and the pilot through the night using cell phone data, radar data, and plane transponder frequency. 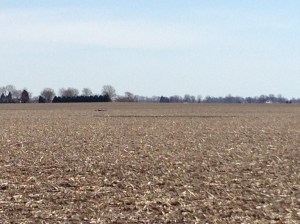 The plane was located in an open field around 8 a.m. this morning. The plane was partially in the ground with the tail section exposed.

“It was the forensic analysis of the radar data and the cell phone information that pretty much got us to the place we needed to be,” said Lieutenant Colonel Tim Turner with the Civil Air Patrol.

The NTSB is on its way to the crash site to investigate.

The Boone County sheriff said the area is very rural and, “It does not surprise me that nobody saw or heard this plane.”

Foy is a Marion County resident, but his girlfriend lives in Boone County. Foy’s body has not yet been recovered.

INDIANAPOLIS -- The Indianapolis Metropolitan Police Department is investigating after a Marion County Sheriff's Department deputy shot a man in Broad Ripple on Saturday evening while attempting to serve a warrant.

According to IMPD, the police action shooting occurred in the 6300 block of Westfield Boulevard near the Rise N Roll Bakery at around 5:25 p.m.

INDIANAPOLIS -- The Indianapolis Metropolitan Police Department is investigating after a child was wounded in a shooting on the city's northwest side Saturday evening.

The IMPD said the shooting happened in the 3900 block of Glen Arm Road shortly after 6 p.m. Saturday. When officers arrived, they found a younger child with injuries consistent with a gunshot wound. The child has been transported to Riley hospital in stable condition.

INDIANAPOLIS – Police are investigating a shooting on Indy’s near northwest side that left two people injured Saturday afternoon.

The Indianapolis Metropolitan Police Department said the shooting happened in the 900 block of Roache Street around 3:15 p.m. Saturday. When officers arrived, they found a victim at the location, with another victim located near 25th and Radar.

Reasons why your tax refund may be delayed, what the IRS is saying