INDIANAPOLIS, Ind. — A man was stabbed at a bar on Indy’s east side Friday night.

Around 11:30 p.m., officers were dispatched to the 300 block of North Colorado Avenue near East New York Street.

Officials say a bar fight at “The New Yorker” led to a man being stabbed under the arm.

The victim was transported to Eskenazi in serious condition.

No word on what led to that fight.

Bar patrons held the suspect down until officers arrived at the scene. 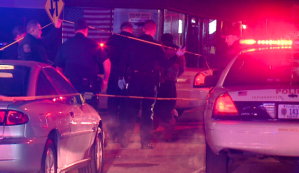 The suspect was taken into custody.

An investigation is underway to determine if charges will be filed.

The IMPD said 75-year-old Alvin Yates Jr. was last seen around 7 a.m. Tuesday. The department said Yates was recently diagnosed with cancer and has been making threats to harm himself.

INDIANAPOLIS – Winter weather is on the way, and a local organization is making sure people are prepared to protect any outdoor pets.

Indianapolis Animal Care Services (IACS) says it is against City-County ordinance to keep your pet outdoors if the temperature falls below 20 degrees or if a wind chill advisory has been issued. People failing to care for their pets in cold weather could face fines or jail time. Those who choose to disobey the law can expect to be ticketed and pay a fine of up to $200.

The Sullivan County Sheriff’s Office said the arrest comes after a deputy learned that a stolen backhoe from Crawford County, Illinois was at a Sullivan County residence. Deputies were able to get a search warrant for the property.

‘There is no reason you can’t work’: Manager fired for text exchange with worker whose son is on life support